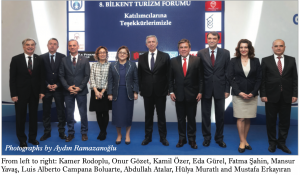 On December 12, the Department of Tourism and Hotel Management hosted the eighth Bilkent Tourism Forum, bringing together representatives of key public and private tourism industry organizations and higher education institutions. The theme of this year’s forum, which took place at the Bilkent Hotel and Conference Center, was “Gastronomy Tourism – 5N1K,” with a focus on utilizing and developing gastronomy and the culinary arts as part of tourism destination marketing.

Then came the first of two panel sessions, consisting of four keynote speeches. These were given by Ms. Şahin; David Mora Gomez from the Basque Culinary Center in Spain, representing the World Tourism Organization; Hugo Guevara Vasquez from the Peru Trade Office; and Ömer Kartın, director of gastronomy tourism for TÜRSAB. The speakers shared their visions for developing gastronomy tourism in Turkey with respect to their areas of expertise. They suggested that local governments should take a more active role in the development of gastronomic tourism, as well as establish contact with organizations such as UNESCO in order to increase international awareness of the Turkish cuisine culture. They also suggested that instead of allowing ruthless competition between cities, it would be much more constructive to promote regional cooperation and use local communities, with their knowledge of food culture and traditions, as a resource. The panel in addition highlighted the importance of providing training and education in gastronomy and food tourism. 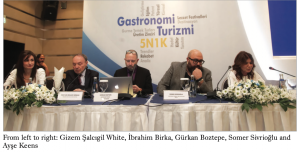 The afternoon panel consisted of a discussion of practices in the industry. Speakers were Somer Sivrioğlu, a 1993 THM graduate and a jury member for the television program MasterChef Turkey; Gürkan Boztepe, chair of the Culinary Travel Society; Prof. İbrahim Birkan of Atılım University; and Gizem Şalcıgil White, a 2004 Bilkent Banking and Finance graduate and founder of the Turkish Coffee Lady gourmet coffee shop.

The forum concluded with remarks by Mustafa Siyahhan, instructor in the Department of Tourism and Hotel Management, and Soner Cörüt, a 2003 THM graduate and specialist in the Ministry of Culture and Tourism. The final highlight of the event was a book-signing session by Mr. Sivrioğlu and THM Chef Instructor Elif Denizci.