23 December 2013 Comments Off on A Little Success Story: “Sirens of Lachesis” 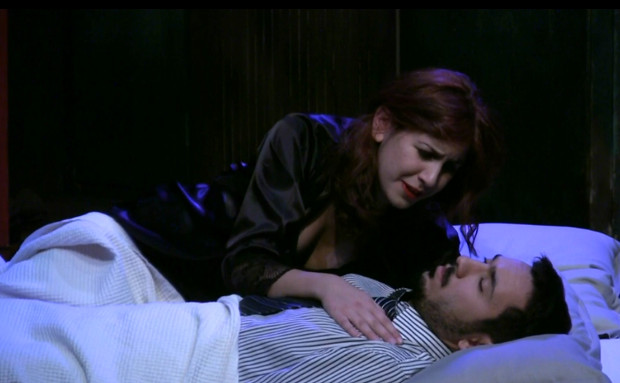 For reasons of our own, we’re walking to the FMPA Theater in a state of excitement. We enter the building with quick steps, in a rush caused by our curiosity — for one among us is about to accomplish something not so many manage to achieve. A playwright who is only in the senior year of her undergraduate studies is there at the theater, eagerly waiting for us — fellow members of the Bilkent University Literature Society.

Ceren Turan, all in a tizzy, is at the door to welcome us to the performance of the play she has written, in English, at the age of 22. Wondering whether we are more excited or she is more nervous (although this is the second performance of her play), we find our seats in the theater, and the performance begins.

Our friends on stage seem to have left their identities outside the door; they resemble professional actors, despite the little experience they have in the field. In Ceren’s stance, I can see a woman standing up for her play, which she has written and directed, and is performing in as the female lead. Though she hasn’t yet been married, what gives life to her character is the impression she makes of a woman who is aware of what it’s like to be a woman.

While we’re still relishing the scenes of the first act, which depicts a book club meeting (in a rather tragicomic way), the husband’s work environment and the relationship between husband and wife, we move on to the second act to enjoy the monologues. During these numerous and extended monologues, even though one is aware the actors are not professionals, the fact that they are performing in English in itself inspires admiration. Being part of a play that has never been staged before, realizing characters who have never been enacted before and living through words that no one has previously spoken, is something we all think requires courage and deserves success. At this point, we are of the opinion that the applause should be divided evenly among all the members of the cast and crew, for one cannot tell exactly how these lines have been written and made alive in front of us: these beautiful lines that tell the story of inner struggles, of depression that leads to madness, and of a man who has never lived and events that have never taken place.

When the play comes to an end, our appreciation is accompanied by some questions. We try to complete the picture by comparing our different perspectives and reach the conclusion that we are satisfied with the play. Some of us, handicapped by a language that is not our mother tongue, have failed to recognize the severity of the depression that the female lead has gone through before our eyes. However, one thing we all agree on is that one of us has accomplished something, and what we are feeling is pride. With this, a first play by a 22-year-old Bilkent student with a very heavy workload, Ceren has achieved a unique place in our minds and also in those of her friends on stage. We offer our congratulations to the cast and crew of “Sirens of Lachesis.”