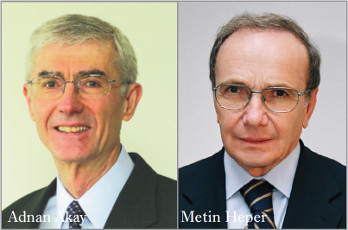 Bilkent University has announced that Prof. Metin Heper will be relinquishing the position of provost/vice rector for academic affairs. Prof. Adnan Akay has been appointed as the new provost.

Prof. Heper had previously informed the university administration that he wished to resign the position, which he has held since 2010, to concentrate on research and teaching.

Rector Abdullah Atalar expressed the university’s gratitude to the departing provost: “Prof. Heper has served Bilkent University since 1988 in many capacities: as faculty member, department chair, dean and, for the past four years, provost. We extend our deepest appreciation for his dedication and his many contributions to the university and the Bilkent community, and look forward to his continuing contributions as a scholar and teacher.”

The appointment of Prof. Akay as provost was approved by the president of the Board of Trustees on Thursday, February 20. Prof. Akay, who currently serves as vice president of the Board of Trustees and chair of the Department of Mechanical Engineering, will assume his new position on March 1. Commenting on the appointment, Rector Atalar said, “I would like to take this opportunity to congratulate Prof. Akay and wish him every success in his new administrative role.”

Adnan Akay joined Bilkent University on January 1, 2009, as vice president and founding chair of the new Department of Mechanical Engineering. Previously, Dr. Akay had served at the US National Science Foundation as director of the Division of Civil, Mechanical and Manufacturing Innovation, and as a professor in and head of the Department of Mechanical Engineering at Carnegie Mellon University, where he held the Lord Chair in Engineering. From 1978 to 1992, he was on the faculty at Wayne State University, where he held the DeVlieg Chair in Engineering. Between 1976 and 1978 he was a visiting staff fellow at the National Institute of Environmental Health. He has held visiting appointments at MIT, the University of Rome La Sapienza and the Institut National des Sciences Appliquées (INSA) de Lyon in France.

Prof. Akay is an active member of the engineering professional community, and has been recognized for his contributions to research, education and professional service. Prof. Akay is the recipient of the ASME Per Brüel Gold Medal (2005) **************** and the Humboldt Research Award (2011). He is a fellow of the American Society of Mechanical Engineers, a fellow of the Acoustical Society of America and a member of several honor societies. Dr. Akay serves on the advisory boards of several universities and regularly consults with international industrial firms and organizations as a technical advisor.