11 November 2019 Comments Off on An Untold Story: Li Xianglan

I do not fear longing
But your sorrow haunts me
We only have the wind to blame for our parting
I do not fear solitude
But your loneliness haunts me
No one will hear of our desolation
This week, I want to share a story that I discovered through a beautiful song: “Autumn Strong,” which was written in Mandarin in memory of Li Xianglan, a singer and actress who was caught between two fires and burned to ashes by homesickness. I recommend that you listen to it, as sung by Dimash Kudaibergen. I believe the song found me, and the story wanted to be heard. Let’s remember this amazingly talented woman whose life was spent in sorrow, and let’s hear of her desolation. (The following narrative is based mainly on information found in yoshikoyamaguchi.blogspot.com.)

Yoshiko Yamaguchi, known as Li Xianglan in China, was born on February 12, 1920, in Manchuria (northeastern China) to a Japanese family. Her father, Fumio Yamaguchi, was a railway employee who had moved to Manchuria with his family in 1906 after the end of the Russo–Japanese War. It is important to know that at that time, Manchuria was an area in which at least five ethnic cultures – Chinese, Korean, Japanese, Russian and Mongolian – existed side by side. But when Chinese nationalism started rising in reaction to the Japanese invasion of Manchuria in 1931, the Yamaguchi family began calling their daughter Li Xianglan.

Around that time, she contracted tuberculosis. The doctor recommended singing to strengthen her lungs, so she started taking voice lessons. She appeared on stage for the first time when she was only 12, as a star performer in a recital. She was immediately noticed by a representative of the Fengtian Broadcasting Station and started singing on the radio.

In September 1932, on the night of the traditional Moon Festival, a group of Chinese partisans resisting the Japanese occupation fired on Japanese guards and employees, and killed at least 8 of them. Japan responded by killing a huge number of villagers in the area, in what came to be called the Pingdingshan massacre. That year, Li Xianglan saw Japanese soldiers torture a Chinese partisan and hang him on a tree; she later said that the memory of that incident stayed with her throughout her whole life.
In 1933, she decided to go to Peking to study. While there, she continued to sing and also started modeling. Her father, however, wanted her to return to Manchuria because he was concerned for her safety and sent two Japanese intelligence agents to persuade her. But she refused to go back, saying that she was not afraid of her own people, meaning the Chinese. This indicates that she was not merely faking a Chinese identity to live safely in China as a Japanese national; she genuinely felt herself to be part of the country. 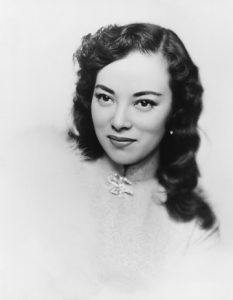 Subsequently, one of the intelligence agents introduced Li Xianglan to his Japanese friends in the movie industry; this was the beginning of her acting career. Her star rose very quickly, since she had considerable singing and acting abilities, and was stunningly beautiful. She later saw this experience as “being used like a puppet,” since the movies were considered Japanese propaganda and later caused her to be seen as a traitor. But her parents had already signed a contract with the intelligence agent for her to continue filming, so she wasn’t able to back out.

After graduating from high school, she was invited to the Greater East Asia Construction Exposition in Osaka, Japan. She went there as a guest singer and was designated an “ambassadress” from Manchuria. Her choice of a high-collared Chinese dress to wear to the event provoked negative comments from some. She later wrote in her memoirs, “When they told me to act like a Japanese, not like one of those ‘Chinks,’ I didn’t say ‘I am Japanese.’ I took those words as if I was a Chinese.”
Returning to China, Li Xianglan continued her acting career. She took leading roles in more so-called propaganda films, such as “Song of the White Orchid,” “China Nights” and “Vow in the Desert,” singing as well as acting. By the end of the 1930s, she would be one of the most popular singing stars in China.

After World War II started, Li Xianglan was arrested for treason and her interactions with the Japanese. She was in danger of being executed when her childhood Russian friend Lyuba Monosova Gurinets appeared on the scene, bringing her birth certificate (obtained from Li Xianglan’s parents) and saving her life. After it was understood that she was actually Japanese, rather than a Chinese national, she was cleared of the charge of treason, and left China for Japan. After a period of deep sorrow and shame, she went on with her acting career in Japan and also in the US. She worked with the famous director Akira Kurosawa, married twice, became an activist and kept on singing.

Li Xianglan didn’t go back to China for around two decades after the war, because she felt that the Chinese hadn’t forgiven her. During those 20 years, she expressed her sorrow and regret at every opportunity. She sang Chinese songs; starred in “Woman of Shanghai,” a film about a young woman trying to get back to China after the war; and wrote her memoirs. She died in 2014 in Tokyo, at the age of 94.