On September 27, Marc Schumacher, the general manager of the Ankara HiltonSA Hotel, visited the Department of Tourism and Hotel Management. During the visit, Mr. Schumacher and Asst. Prof. Eda Gürel, acting chair of the department, signed a strategic partnership and goodwill agreement between the hotel and the department, both of which were established in 1988 and are celebrating their 30th anniversaries this year. The agreement certifies the cooperation that has existed between the two institutions over the years. 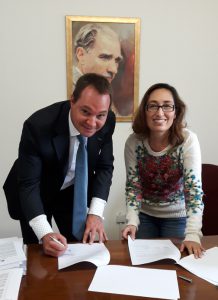 Mr. Schumacher’s visit also included a talk that he gave as part of the THM 420 Seminars on the Tourism Industry course. In his talk, titled “The New World: Time for Transformational Leadership,” he shared his experience and knowledge of the industry and discussed different leadership styles, which he illustrated by engaging students and having them work in teams.

Mr. Schumacher stressed that there is no one “best” leadership style, stating that the style should change according to the culture and situation in question. He also noted that a leader should be able to make subordinates aware of their importance to the company and their own development potential, as well as motivate them to see “the big picture.” In concluding his talk, he declared that a leader should have emotional intelligence, challenge the status quo and be innovative.