Bare To Dare: A Project From Bilkent to Shatter Fake Beauty Ideals

14 May 2019 Comments Off on Bare To Dare: A Project From Bilkent to Shatter Fake Beauty Ideals

A scar on your body has the power to remind you that you’re alive and, often, that you’ve come through some of life’s challenges. Trouble arises, however, when it reminds you of some other things as well – for instance, that society’s standards of beauty are telling you that you’re not good enough because your body doesn’t fit within those standards.

This is what Tuğçe Çalışkan explains in a short video clip where she shares her story and says “I’m in” to a project whose mission is to encourage people to be at peace with their distinctive marks and scars, whether congenital or acquired later in life. She is one of the seven courageous women who didn’t hesitate to share their scars with others by modeling for “Bare to Dare.” 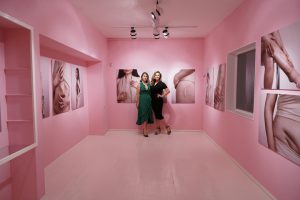 “Bare to Dare” is a public relations and social awareness effort developed by two very bright Bilkent Communication and Design students, İpek Naz Çınar and Su Müge Şahin, as their senior project. At the beginning of last semester, they decided to put their values into play and study what they believed in, with the mission of reaching others and raising awareness of the way societal or personal norms about how a body should look affects people’s, and especially women’s, self-esteem. In a pilot study that included a detailed public opinion survey, İpek and Su found that the demanding ideals of beauty adopted by society are imposed primarily on women. So, as two women, they decided to expand their project, reaching out to women who had a variety of “imperfections” on their bodies and photographing them. With the sponsorship of the Turkish Society of Plastic Surgery and Siyah Beyaz Art Gallery, these photographs became the basis for an exhibition and the boundaries of the project enlarged beyond Bilkent so that even more women could say, “This is me; I am different, and I am who I am with my differences.”

To say this, however, is not that easy. The name of the project highlights the idea of showing your courage. In the gallery, we see nude-colored photographs of women showing their bodies explicitly, without hiding their scars. This is an act of braving not only society but also oneself. As the models in the exhibition note while sharing their stories, when they come across someone else whose body has some type of difference, they simply accept that difference and see it as a unique, brilliant signature. But when it comes to themselves, they say, it’s harder for them to accept their own beauty and ignore the societal ideals they find themselves imposing on their bodies. I thought the same thing at the exhibition; all those models in the photographs looked so vivid, so brilliant and unique to me, but I also questioned whether I could be brave enough to expose myself like that, freeing my body from my own fake ideals of beauty. I believe the exhibition will make many others ask the same question.

The scars chosen as the main theme of the project are also important to note. They show that from birth, everyone starts with a different body. Moreover, our bodies are open to life’s edits and interventions. Maybe you had a surgery that left a scar, or maybe you burned your leg while playing when you were a kid. An ideal perfection therefore doesn’t exist. A perfectly smooth skin is one that’s never been lived in. It can’t have life inside. It can’t have experience.

To conclude, I want to emphasize that this project shows that we can all think bigger. Two students are creating change here, and they’re doing it so professionally that their project is now on display in a gallery, is being talked about in the media, and so is reaching people. They’re great examples for us as we deal with the everyday projects that are part of college; and they’re also thinking of continuing this project in the future. So, support them and follow them on social media to see what the next step will be for “Bare to Dare.”