The groundbreaking ceremony for Turkey’s first commercial electronic chip factory took place on Tuesday, December 23, with Minister of National Defense İsmet Yılmaz in attendance. The factory will serve as the production facility of the new company, AB-MikroNano, that was recently established through a partnership between ASELSAN and Bilkent University. At the facility, AB-MikroNano will manufacture micro/nanotechnology-based electronic integrated circuits for the defense, space, communications and energy sectors. 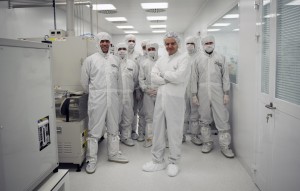 The company’s clean rooms and building will be located in the Bilkent Cyberpark Teknokent area on the Bilkent University campus. When the facility begins production, Turkey will become the fourth country in the world to manufacture strategic technologies such as defensive radar, electric cars, high-speed trains and 4G/5G cell phones incorporating its own GaN-based chips.

Speaking at the groundbreaking ceremony, Rector Abdullah Atalar said, “We are living in the information age, and those who are most productive in terms of information will come in first in this global race.

“Today we are here to mark a new milestone in the development of a technology that has taken place over the past ten years with government funding, resulting in a spin-off company.

“We have missed the silicon train. The gallium nitride train may be smaller, but we are on it, and, who knows? It may well be a larger train, a more powerful vehicle for progress, in the future. I hope this may prove a promising beginning for Turkey.” 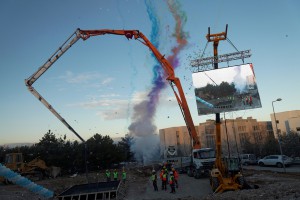 Prof. Ekmel Özbay, director of Bilkent University NANOTAM (Nanotechnology Research Center) and CEO of AB-MikroNano, notes that ASELSAN and NANOTAM have been collaborating for quite some time on nano- and microtechnologies. The new company was founded with a 30-million-dollar investment on the basis of a 50-50 partnership between ASELSAN and Bilkent University. (The “A” and “B” in the company’s name come from the first letters of the partners’ names.)

It is hoped that this partnership will set an example for university-industry collaboration in Turkey. For the first time, a Turkish university is taking full financial responsibility in working with industry to commercialize technology developed at that university. Such high technology spin-off companies can have a very important role in Turkey’s economic advancement.

“Until now,” said Prof. Özbay, “we always had a dream: ‘Our research will result in commercial products, and contribute to Turkey’s prosperity.’ For a long time, this remained only a dream. But now we are making the dream reality—we are laying the foundations of the production facility of a company that will be the first in Turkey to manufacture electronic chips commercially.”

He also pointed out the critical importance of micro/nano chips for the development of a number of strategic industrial sectors. “We will be manufacturing chips that are superior to the ones that Turkey formerly purchased—and sometimes could not obtain. Turkey will thus become a country with the capacity to manufacture high-tech products with a high added value, since the company’s nanotechnology-based products are being designed by us and will be exported as well as used domestically.” 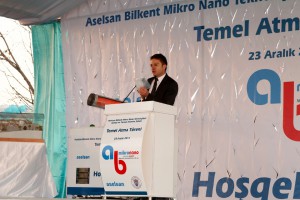 Bilkent NANOTAM has been working with ASELSAN on GaN technology for the last 10 years. Chips fabricated with this new advanced material can withstand very high temperatures and are also more powerful. They therefore have strategic importance in product development in nearly every electronic sector, most notably the defense and space sectors.

The chips to be manufactured by AB-MikroNano will be used in Turkey’s “defense shield” project to extend the capability of its radar systems. Prof. Özbay stated that the technology developed by the partnership has the potential to make these systems, which will be manufactured by ASELSAN, 5 to 10 times more powerful.

Aside from defense, the communications, energy and transportation sectors are expected to be the principal beneficiaries of AB-MikroNano’s innovations in chip production. For instance, the chips can be used in the telecommunications industry to enable 4G and 5G technologies, with cellphone system base stations employing them to boost their power, in turn increasing cell phones’ internet speed.

In the energy sector, too, the chips have the potential to boost efficiency and productivity, by eliminating the 20% energy loss due to the conversion of voltage several times during the transportation of energy produced by solar, wind and hydroelectric installations. Turkey could thereby obtain 20% more electric power from its existing facilities.

Other planned uses for the new-generation high-power chips include high-speed train and electric car technologies. These are technologies that Turkey is increasingly looking to in order to meet its future transportation needs. AB-MikroNano’s products could result in more powerful and efficient electric motors for such rail and automotive systems.