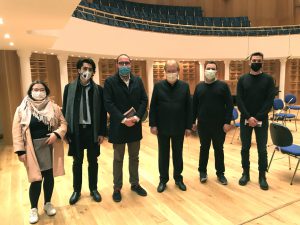 During the last week of November, the Department of Music’s composition program hosted two events focused on contemporary music.

From Monday through Friday, the Viennese new music ensemble XX. Jahrhundert was in residence on campus. The ensemble, led by founder Peter Burwik, has been active for nearly four decades, making it a venerable and respected presence on the contemporary music scene.

During XX. Jahrhundert’s stay here, they rehearsed and workshopped five pieces written by Bilkent student composers. The residence and workshops culminated in a Friday evening concert in the Bilkent Concert Hall, which was broadcast live on the Bilkent Music YouTube channel to an audience of more than 300 people worldwide.

On Saturday, November 28, composer Chaya Czernowin, a leading figure in contemporary music and a professor at Harvard University, gave a talk to an audience that included around 150 online viewers from around the world. She discussed two of her most recent pieces, including her latest opera, “Infinite Now.”