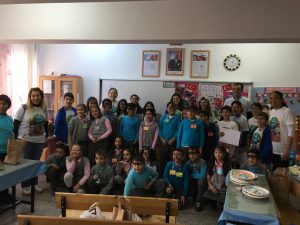 On December 7, a team from IDV Özel Bilkent Middle School led a program for fourth-graders at Nihat Başakar Elementary School in Ankara. The program was part of an initiative undertaken by Bilkent Middle School in partnership with Children Are The Hope, Inc. (CATH), a nonprofit organization based in the state of Wisconsin in the US. The partnership has brought cultural exploration, environmental education and art experiences to classrooms in both countries over the last three years.

CATH’s mission is to reach across barriers such as language, politics and geography to nurture children’s knowledge of and sensitivity to their global peers through artistic collaboration and creative expression, social and cultural exploration, and diversity education to inspire respect for each other and the global community. CATH currently cultivates student connections and artistic exchanges in Wisconsin, Turkey, Cuba and Rwanda.

This year, Bilkent and CATH were awarded a grant through the Alumni Grants Program of the US Embassy, which is being used to fund expansion of the existing initiative to two additional schools in Ankara. Nihat Başakar Elementary School is the first of the two schools to benefit from the expansion.

The day-long event on December 7 was organized by the Bilkent Middle School principal and three teachers; 11 Bilkent students helped conduct the program. Ersin Dur, representing the US Embassy in Ankara, was also in attendance.

The Bilkent students led the fourth-graders in several activities, including an introduction to CATH and its director and founder, Korie Klink, who guides CATH efforts in Wisconsin. Educational stations, featuring activities including origami, face-painting, paper-plate art and the production of a wall-sized canvas painting, invited the children to express their creativity throughout the day.

The next phase of the project will include a visit to Bilkent from Nihat Başakar students on April 3. The Bilkent team will be visiting the other expansion school during the second semester.