10 November 2014 Comments Off on Bilkent Pays Homage to Atatürk

November 10, 2014, marked the 76th anniversary of the death of Turkey’s beloved Atatürk. Bilkent University commemorated the solemn occasion with a concert and ceremony.

On the evening of Saturday, November 8, the Bilkent Symphony Orchestra presented its annual “Commemoration of Atatürk” concert. On November 10, the ceremony began at Bilkent’s Atatürk Monument with a moment of silence. 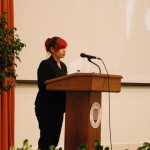 Following the concert, fourth-year Economics student Lalin Yüksel gave a talk, “Cumhuriyetin Tanığı bir Foto-Muhabir: Foto Cemal Işıksel.” Itwas based on the prize-winning research for the 2012-2013 “HIST-200/History of Turkey” award, with Lalin representing a team that also included İpek Küçük (MAN), Merve Tekin (PSYCH), Gül Oral (IR) and Kıvanç Asutay (ECON). The talk reviewed the life and career of Cemal Işıksel, who became Atatürk’s photographer in 1925, and included the story of the first time the two men met. Lalin also described Mr. Işıksel’s love and respect for Atatürk and recounted some of his memories of the founder of the Republic of Turkey.

The commemoration ceremony continued with a tribute given by Prof. Özer Ergenç of the Department of History, entitled “Atatürk and the Environment He Grew Up In.” Prof. Ergenç began by noting that Atatürk and his generation had been born and lived during the most troubled era of the Ottoman Empire. 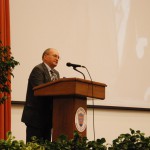 He continued by describing the three most important qualities of this generation. First, most of them were educated in the civil and military schools teaching “the new knowledge,” rather than in the madrasahs. Secondly, most of them were members of immigrant families coming from lands lost during this period, or those who had felt in imminent danger of being in the same situation. Finally, they had all been appointed to positions well above what would be expected for their ages and ranks; this gave them great responsibilities and so matured them early.

Concluding his talk, Prof. Ergenç emphasized the fact that among all the remarkable individuals of this generation, the most prominent figure by far was Atatürk.