10 November 2015 Comments Off on Bilkent Pays Homage to Atatürk 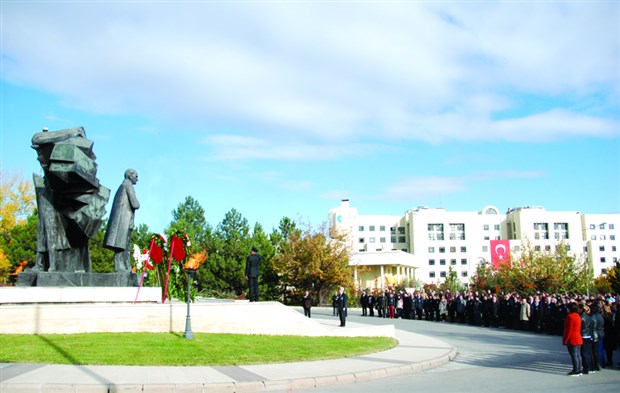 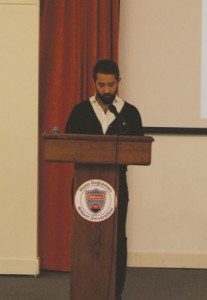 November 10, 2015, marked the 77th anniversary of the death of Turkey’s beloved Atatürk. Bilkent University commemorated the solemn occasion with a concert and ceremony.

The ceremony began at Bilkent’s Atatürk Monument with a moment of silence. It then continued at Mithat Çoruh Auditorium, with a mini concert performed by bassoonist Ozan Evruk of the Faculty of Music and his students Ahmet Öznacar and Sevgi Varol.

Following the concert, fourth-year Electrical and Electronics Engineering student Eray Yiğit gave a talk, “Hüseyin Gezer and the Bilkent University Atatürk Monument.” In his talk, Eray provided background on the art of sculpture in Turkey, with particular reference to the place of Atatürk monuments in the country’s sculptural tradition, before turning to focus on the life and works of Hüseyin Gezer, the sculptor of the Bilkent University Atatürk Monument. Eray also discussed the construction of the monument itself. 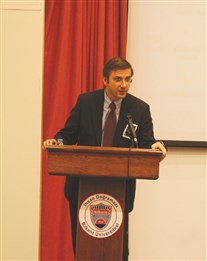 The commemoration ended with a tribute given by Asst. Prof. İlker Aytürk of the Department of Political Science and Public Administration, entitled “Rediscovering Atatürk.”

Dr. Aytürk began by noting that academic studies on Atatürk have so far been shaped by two distinct paradigms. He proceeded to explain why the later, post-Kemalist paradigm is currently waning and will probably be replaced by a new perspective. In conclusion, Dr. Aytürk emphasized the need to rediscover Atatürk’s legacy and pointed to three areas in particular—identity politics, secularism and foreign policy—in which we can still learn from his foresight.