11 November 2019 Comments Off on Bilkent Pays Homage to Atatürk

November 10, 2019, marked the 81th anniversary of the death of Turkey’s beloved Atatürk. Bilkent University commemorated the solemn occasion over the course of three days with several events.

On November 9, the Bilkent Symphony Orchestra, conducted by Christoph Poppen, presented a concert in memory of Atatürk. The performance, which took place at the Bilkent Concert Hall, featured piano soloists Iraz Yıldız and Yunus Tuncalı and included pieces by Mozart and Beethoven.

On November 11, a ceremony took place at Mithat Çoruh Auditorium. It began with a moment of silence and the national anthem, followed by a mini-concert performed by the Bilkent Chamber Ensemble. Next, students Ezgi Çırpanlı (ARCH), Gaye Gül Ersan (MAN), Buket Gürbüz (ARCH), Aslı Taş (CHEM)  and Gökçe Tekin (ARCH) presented their HIST200 project, “From Rumkuş to Erenkuş: The Story of Erenkuş Ersan, One of Atatürk’s Adopted Children.” 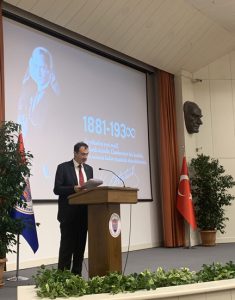 Following this, Yiğit Aydın, instructor in the Department of Music and director of the Ahmed Adnan Saygun Center for Music Research and Education, gave a tribute titled “Atatürk and Music.”

Mr. Aydın began by noting the affinity of Atatürk’s ideas regarding music with the music philosophy of the ancient Greek philosophers Plato and Aristotle as well as with the ideas of the French enlightenment thinker Montesquieu.

He then described the stages of modernization, internationalization and reorganization of musical life in late Ottoman and early Republican Turkey, and the role that Atatürk’s thought and initiative played within those processes. He elaborated on the connections of Atatürk’s perspective on culture with that of some Turkish authors as well as with the endeavors of the European musicians who participated in the institutionalization of a modern musical culture in Turkey. 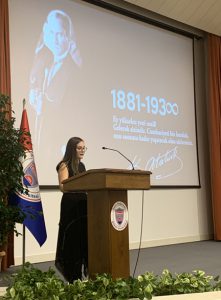 Mr. Aydın concluded his remarks by explaining the interconnections between the so-called music reform and university reform processes during the interwar period and noting that there is a need to correct some prevalent over-interpretations and stereotypes regarding Turkish musical life and composers in early Republican Turkey.