11 November 2013 Comments Off on Bilkent Pays Homage to Atatürk

November 10, 2013, marked the 75th anniversary of the death of Turkey’s beloved Atatürk. Bilkent University commemorated the solemn occasion with a concert and ceremony.

On the evening of Saturday, November 9, the Bilkent Symphony Orchestra presented a “Commemoration of Atatürk” concert. The following day began at Bilkent’s Atatürk Monument with a moment of silence. After this, a mini concert, performed by Ömer Berk Taraklı, Kerem Tuncer, Katre Bozoğlu, Çılga Barok Bostancı and Anıl Atakan Çalışkan, was held in Mithat Çoruh Auditorium. 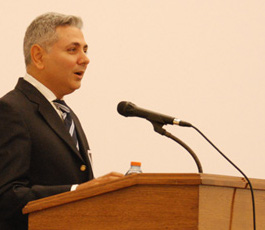 The commemoration ceremony continued with a tribute given by Asst. Prof. Tolga Bölükbaşı of the Department of Political Science and Public Administration, entitled “The Scientific Approach and Atatürk.” Dr. Bölükbaşı began by reflecting on the story of the installation of Bilkent’s Atatürk monument, which bears Atatürk’s inspiring statement, “Biz, Medeniyetten, İlim ve Fenden Kuvvet Alıyoruz” (We Derive Our Strength From Civilization, the Sciences and the Arts). He continued with observations on the university reforms of the 1930s, which helped instill the scientific approach in tertiary institutions in Turkey. As a public policy specialist, Dr. Bölükbaşı concluded his talk by emphasizing the significance of the scientific approach, a key principle of Atatürk, in guiding science and education policies.