Bringing the BSO to You: Bilkent Symphony Digital

26 January 2021 Comments Off on Bringing the BSO to You: Bilkent Symphony Digital

Like all performing arts organizations, the Bilkent Symphony Orchestra has had to adjust its operations during the pandemic to accommodate the necessity for social distancing – not just once, but repeatedly. Currently, the BSO is reaching out to listeners in the comfort and safety of their own homes by means of the Bilkent Symphony Digital platform, with recorded concerts accessible online.

“When we announced last March that we would be cancelling our concerts for the rest of that season, we were hoping to start the new season under normal conditions,” said BSO Music Director Nusret İspir, explaining how the orchestra has managed to cope with the ever-changing situation. “But in this extraordinary period we are in, we had to develop a Plan A, B, C and so forth for our concert season as the pandemic continued.” 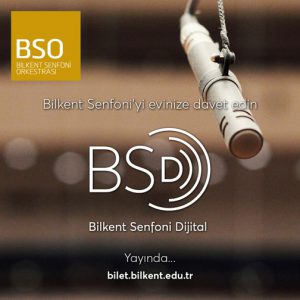 The BSO was able to present the first concerts of the 2020–2021 season to an in-person audience, whose numbers were limited to allow for ample distance between occupied seats in the concert venue. (Orchestra members’ chairs were similarly spaced far apart on the stage.) But as stricter curfews and other measures were imposed to combat the worsening pandemic, it became necessary to suspend live performances, with the last one taking place on November 29.

After that, the BSO began recording its performances without an audience, so that concerts could be made available online. The recordings are being made in collaboration with the university departments of Music and Communication and Design.

“Regardless of the circumstances, we sought ways to continue sharing our music with our audience,” said Mr. İspir. “Thus, we launched Bilkent Symphony Digital. We encourage everyone to invite the BSO into their homes by means of this platform.”

Music lovers can now enjoy Bilkent Symphony Digital concerts online  for a nominal fee of 10 TL. The concerts can be accessed at https://bilet.bilkent.edu.tr/