Closer to Unknown Pleasures: An Introduction to Joy Division

04 November 2019 Comments Off on Closer to Unknown Pleasures: An Introduction to Joy Division

Not too many albums are considered milestones in popular music. Once in a while, a band releases a new album that in turn initiates a new trend; and then sooner or later, the original idea becomes overdone. This process can be considered a turnover and reconsideration of old ideas. One of those bands whose music has aged very well and is still emulated by new musicians is Joy Division.

This band has had great influence on popular culture but is nonetheless seldom well understood. Unfortunately, most people’s knowledge of it goes no further than the famous Joy Division T-shirt. The band was formed in the early stages of the post-punk or new-wave era, alongside other greats such as Public Image Limited. The era was special because the bands realized the flexibility of the four-piece rock band formation and the utility of studio manipulation. Taking their influences from German krautrock bands and glam rock artists such as David Bowie, Joy Division created a sound that represents the dark, anxious but also elegant corners of the human soul. Musically, they are very repetitive and simple, but the emotions they evoke and the sonic experimentation they undertake are so intense that they are never boring. The lyrics are poetic and deal with various subjects; however, I would not recommend the band’s songs for people with emotional issues, because they are too intense. This property, in fact, is one of the traits Joy Division is best known for.

The frontman and vocalist Ian Curtis unfortunately suffered from epilepsy. During stage performances, he may have had seizures but disguised them in the form of his signature dance. Although he had a very unique and powerful voice, his vocals are technically not that intricate. However, he is known for the lyrics he wrote, which are both poetic and genuine. His anxiety, the depression he suffered from due to his illness and his family problems are all reflected in those lyrics. The storytelling is there for you to find, but if you are not that emotionally invested, they simply blend well with the music. 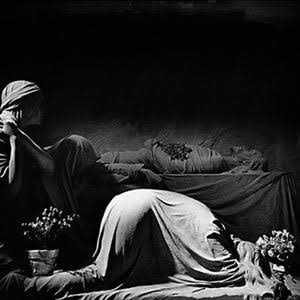 Joy Division did not release that many albums during their existence. Along with singles, concert albums and EPs, they produced only two LPs: “Unknown Pleasures” and “Closer.” It was the cover of the former that became the famous T-shirt. All the songs from “Unknown Pleasures” sound very different from each other, even though they were produced using the same or similar techniques. The band was very adept at incorporating noise into their sound, which had not really been a trend in popular music before then. The way that the instruments share their roles is also a very interesting aspect of the album. The bass guitar here sounds much like a broken exhaust pipe, in terms of power. It delivers the melodies, thus in a way taking on the role of a lead instrument. The guitars are very distorted, reverberated and noisy, creating an atmosphere and making you feel that you are inside the same room, going through the same experiences as the band. The drums are very experimental, with creative production techniques such as overdubbing or incorporating perfume-spray sounds in the rhythm, along with Stephen Morris’s krautrock-influenced repetitive but precise playing technique. Interestingly enough, other than in a few passages the album makes very little use of synthesizer sounds, even though it is so experimental. The melodies are very simple but effective, possibly due to their sonic details. The drumming is very anxious, giving a sense of constant panic and unrest. With Curtis’s vocals on top of all this, the album is a classic. The songs have various themes but are often cryptic; one should listen and decipher them for oneself. The exception is “New Dawn Fades,” which obviously hints at Curtis’s suicidal tendencies.

After “Unknown Pleasures” came “Closer.” Here Joy Division pushed their boundaries further, exploring different sonic textures and song structures. Synthesizers are more abundant, and the production style is considerably more experimental. Songs are more structured, with defined passages, verses and choruses in most. Noises are again incorporated very well, especially in “Decades,” which marks the end of the album, and thus of Joy Division’s studio career. This album too is emotionally hard going. But both “Closer” and “Unknown Pleasures” should be in the library of any music lover, as they are hallmarks of a scene.
Tragically, due to his illness and personal issues, Curtis committed suicide. After this, and the end of the band as such, the remaining members reunited as New Order, which influenced the next generation of musicians at least as much as Joy Division. Today, many indie bands reproduce Joy Division’s sonic textures and their repetitive, hypnotic, depressive and simplistic style with varying degrees of success. Considering the successful formula they created, it does not seem like this cycle will end, but only evolve.