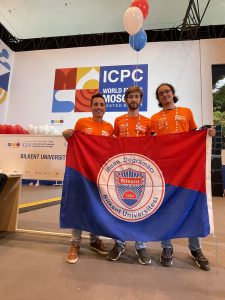 A team of Computer Engineering students represented Bilkent University and Turkey at the world finals of the International Collegiate Programming Contest (ICPC), held October 1–6 and hosted by the Moscow Institute of Physics and Technology this year. Team members Oğuzhan Özçelik, Orhan Uysal and İkbal Kazar were coached by Asst. Prof. Ercüment Çiçek. They were the only team from Turkey to compete in this year’s finals, and only the second team from Turkey to participate in the finals during the 44 years the event has been held.

The ICPC is an algorithmic programming contest for college students, in which teams of three, representing their university, work to solve complex real-world problems. Students compete in local and regional events before going on to the finals. 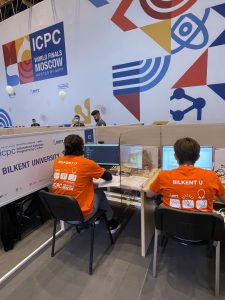 This year, more than 3,200 universities and nearly 59,000 competitors from 110 countries participated in the ICPC, with only 118 university teams qualifying for the finals.

The ICPC website describes the competition, which has been held since 1977, as “the oldest, largest and most prestigious programming contest in the world.” The ICPC is headquartered at Baylor University in the US.