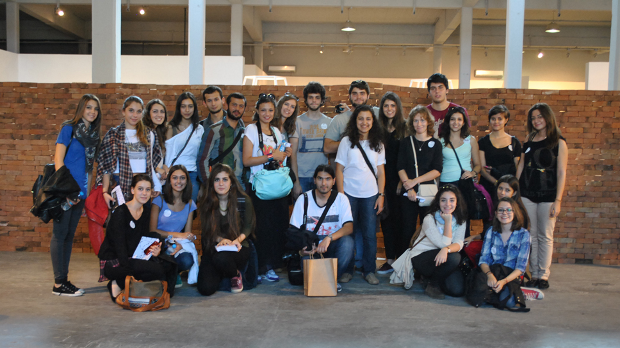 The Design and Architecture Society (DAS) organized a trip to İstanbul during the last weekend of September to see the 13th İstanbul Biennial, coordinated by the İstanbul Culture and Arts Foundation (İKSV).

This year, the theme of the exhibition is “Mom, Am I a Barbarian?”, focusing on the concept of “foreign” or “forbidden” and how people who belong to these categories can become oppressed and ostracized. The Biennial features many international and Turkish artists; it is taking place in several different locations. The DAS trip enabled participants to visit three out of the five galleries — the main exhibition at the İstanbul Modern, Rum Okulu and the SALT Gallery — to view the works of dozens of artists.

The exhibition linked to the Biennial is being held not in the main gallery of the İstanbul Modern, but in the warehouse next door. Even though the main gallery was also converted from a warehouse, the interior for the Biennial is drastically different. Upon entering, the first thing to be seen is a large “brick” wall that just barely blocks your view of the installments beyond. So, a specified path has to be followed to view the various videos and installments.

Two striking pieces are a video of a hip hop group from Sulukule rapping about the injustice of their homes being torn down, and an installment that has 10 flowers linked by cables to a mobile made of paper. The chemical energy that the plants produce is converted into mechanical energy that makes the pieces of paper move harmoniously.

In the other two galleries, this year’s theme is even more strongly presented, through similar media but with greater emphasis on specific groups such as the citizens of Greek origin who had to leave their homes in Turkey during the negotiations between Turkey and Greece in the 1920s.

DAS was formed four years ago in response to the need for a student-led organization in the Faculty of Fine Arts and Design. Each year during the spring semester, the group holds a week of seminars and workshops centering around design, called TasarımBilkent (DesignBilkent). The purpose of this event, as well as other events held by DAS, is to increase the exposure of all students to art and design.

The society may sound like it is exclusive to Fine Arts students, but in fact it welcomes all Bilkent students and has many members from a variety of departments throughout the school who are interested in art, design and/or architecture.