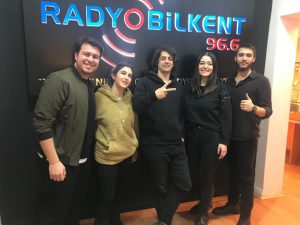 Last week, on the Thursday edition of its popular “Drive Time” program, Radio Bilkent hosted horror film director Can Evrenol. Mr. Evrenol emerged onto the cinema scene during the past decade with “Baskın” (2015) and “Housewife” (2017); he is also one of the directors of the Netflix series “Hakan: The Protector.” These days, his films are being shown in theaters around the country, with his latest movie, “Girl With No Mouth,” released earlier this month.

During the broadcast, Mr. Evrenol talked about the difficulty he initially experienced in getting his films shown at cinemas and expressed his unhappiness with the prevailing negative attitude toward independent films in general. A breakthrough for him came when moviegoers started a campaign in support of his work; the number of those who support him has, he noted, continued to increase.

The director and the “Drive Time” hosts also discussed the premiere of “Girl With No Mouth,” its screening in Ankara and other cities, and his expectations concerning the film. In addition, Mr. Evrenol talked about his life before he began working in the film industry and answered questions about his hobbies and spare-time activities, the movies he likes, and his vision of the cinema.