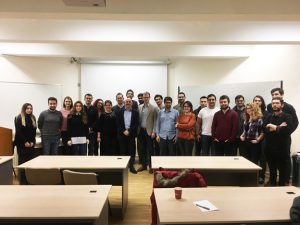 On December 18, director Yasin Ali Türkeri visited Bilkent to show and discuss his documentary film “Başka Tren Gıdı Gıdı” (The Gıdı Gıdı: A Different Kind of Train). The film, released in 2018, tells the story of the Sümerbank Textile Factory in Nazilli, which was built with Soviet assistance in the 1930s.

The documentary approaches the story through the Gıdı Gıdı, a train that belonged to the plant and now waits quietly inside the closed factory for passengers that will never appear. After the film, Mr. Türkeri joined faculty members and students for a wide-ranging conversation that covered, among other things, the research done for the film and how people in both Turkey and Russia responded to his project.

The event was organized by the Bilkent Center for Russian Studies.