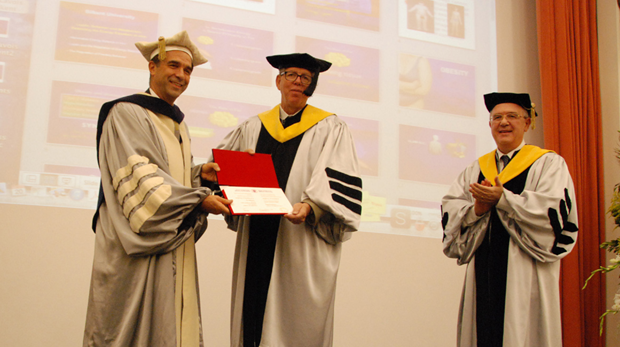 Dr. Friedman began his talk by reviewing the research that preceded his own work, the basis being the discovery in 1949 of a mutation in mice that resulted in obesity. The mutation was called ob/ob (i.e., the mice had two alleles of the obese gene). The next piece of the puzzle was heralded by the parabiosis experiments of Dr. Douglas Coleman, which used two varieties of obese mice — the familiar ob/ob, and a new mutant called db/db — and implied that the blood contained a “satiety factor” that the ob/ob mice weren’t able to produce, and the db/db mice produced in massive abundance but couldn’t react to.

In 1994, as the culmination of eight years of toil, Dr. Friedman identified this very factor — which he named leptin, after the Greek word for “thin.” Having determined the factor responsible for regulating hunger (or the lack thereof), Dr. Friedman then moved to identify the tissues in which this particular hormone was expressed, and found that satiation was determined by adipocytes, once thought to be little more than storage vessels for surplus fat. In fact, adipocytes are now known to regulate the blood concentration of leptin, informing the brain of the body’s current energy reserves and allowing us to tread the fine line between obesity and starvation. 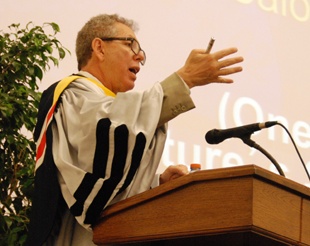 These seemingly inert cells not only keep track of energy intake and expenditure levels, but also serve to restore the balance when the body weight deviates from the optimum. Force-fed mice, for example, stop feeding voluntarily and are soon restored to their original weight when left to their own devices, while leptin-deficient obese mice become as lean and nimble as their healthy littermates when given injections of this hormone. This effect is just as pronounced in humans: when a leptin-deficient four-year-old was given a test meal, he happily consumed 2,000 calories’ worth of food — about the daily intake of an adult human male. But once his congenital leptin deficiency was identified and treated, he rapidly shed his excess pounds and ate no more than a healthy child his age.

The effects of leptin aren’t merely limited to food intake, however: as a key regulator of satiation, it is not surprising that leptin plays a critical role in the control of many energy-intensive processes, including fertility, the immune response and activity levels. Dr. Friedman’s research has demonstrated that certain fertility related disorders, such as hypothalamic amenorrhoea, can also be cured by exogenous injections of leptin.

While Dr. Friedman has done much to elucidate the function of leptin, the story of this staggeringly versatile hormone is far from over, and his laboratory is still hard at work to determine just what this key regulator might be capable of. In addition, while leptin has been effective in patients who lack the ability to synthesize it, the great majority of obese patients in fact have vastly increased levels of leptin, perhaps indicating that they have become leptin-resistant. This, combined with other factors, greatly lowers the benefits of this hormone in obesity treatments, but Dr. Friedman’s recent research suggests that such issues can be circumvented by combining leptin treatment with hormones secreted from the gastrointestinal system. A combined amylin/leptin treatment in particular is now under scrunity as a potential remedy for obesity.