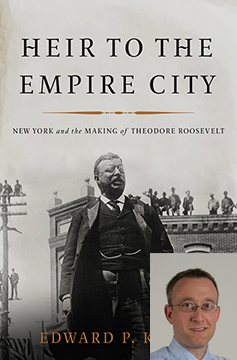 Asst. Prof. Edward Kohn, Department of History faculty member and chair of the Department of American Culture and Literature, has a new book. “Heir to the Empire City: New York and the Making of Theodore Roosevelt” was published by Basic Books in November 2013.

As the publisher notes, “Theodore Roosevelt is best remembered as America’s prototypical ‘cowboy’ president—a Rough Rider who derived his political wisdom from a youth spent in the untamed American West. But while the great outdoors certainly shaped Roosevelt’s identity, historian Edward P. Kohn argues that it was his hometown of New York that made him the progressive president we celebrate today. During his early political career, Roosevelt took on local Republican factions and Tammany Hall Democrats alike, proving his commitment to reform at all costs. He combated the city’s rampant corruption, and helped to guide New York through the perils of rabid urbanization and the challenges of accommodating an influx of immigrants—experiences that would serve him well as president of the United States.”

Dr. Kohn’s new book has already received praise from reviewers. Kirkus Reviews called the book “an intriguing portrait of Roosevelt’s ascendance to power.” Pulitzer-prize winning historian Edwin G. Burrows called it “thought-provoking and refreshingly readable.” And Roosevelt biographer Kathleen Dalton said Dr. Kohn “tells a well-crafted and lightning-quick story of TR and his New York, a tale which will reward readers with entertainment and insight into a central phase of the city and the nation’s history.”