The dog charged into the classroom to make sure—in his own way—that the room was safe for his owner. The students were catching up on their geography, and Küçük Halil was busy drawing a map. Halil was called “Küçük Halil” quite appropriately—not only were the two other Halils in his class taller than he, but he was also little enough to have been seated in the very front row. The man entered the room in the manner that a poet once described, “alev parçası gibi” (like a grand blaze of fire). He approached Halil, who, unable even to raise his head for a glimpse, trembled.

As he retold the story of more than eighty years ago—which he had previously done countless times—the narrator’s eyes filled with tears. The auditorium, packed to its limits, trembled for a second—or at least so it seemed. An infinitude of feelings and thoughts were concentrated in the minds of those present. I, for one, was reminded of how Nietzsche once described hearing one of Wagner’s overtures: “once again, for the first time.” It was as if “Küçük” Halil was retelling [t]his story once again, for the first time. 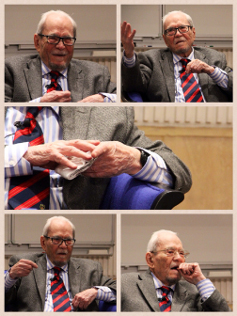 The story dates back to the early 1930s, and the classroom that was its stage used to be the Gazi Terbiye Enstitüsü, now an administrative building of Gazi University. The man with the dog was none other than Atatürk; the little boy, today a giant, was Prof. Halil İnalcık.

Like that of my fellow graduate students in the Department of History, my familiarity with Halil Hoca’s scholarship extends from the historical knowledge he has uncovered with his research, to the historiographical methodology he developed and has been practicing since a time before most Bilkent students’ parents were born. I have not been fortunate enough to receive his instruction, which I would—should this happen one day—treasure till my last hour. Yet, I nonetheless consider myself a student of his, since I am studying in the department he founded over two decades ago, and continues to oversee. I have had the privilege of hearing Prof. İnalcık speak more than once, and on numerous occasions, I have been offered the opportunity of reporting on his words for this very publication. And last Wednesday, February 19, I was there when Halil Hoca accepted the invitation of the Career Center to spoke to the student body. The talk was fittingly entitled, “Halil İnalcık Anlatıyor…”.

Kierkegaard once described Descartes as worthy of being called a true philosopher, because he believed Descartes to have written what he did and to have done what he wrote. Being deemed a true philosopher might be a proper appraisal in philosophy, but it does not really have a counterpart in the social, or human, sciences. Although many professional historians think of some of their colleagues as not really deserving to be called historians, it is seldom, if ever, that you see someone referred to as a true historian. Yet there are individuals, like Prof. İnalcık, for whom something on a par with “true philosopher” must be said. Kierkegaard’s justification becomes noteworthy in this context, because it seems quite an appropriate standard of measure.

It was enlightening to hear Halil Hoca explain what he believes to qualify him and his scholarly work as deserving of the international recognition they receive. “But,” he premised his explanation, “the most important of my achievements never seem to be mentioned by those talking about my biography.”  It is acknowledgement by persons, societies, academies and institutions of teaching that Prof. İnalcık claims to treasure above all. There can be no debate about the extent and diversity of his contribution to historical scholarship, and his work will likely to remain relevant for decades to come. Many may have thought that it is by virtue of this that Prof. İnalcık enjoys such acknowledgment. It seemed to me, however, that he had something more in mind last Wednesday.

Halil Hoca not only mentioned the recognition he had received; he also himself recognized those who had made him and his work possible. The ruling principle here appears to be one of “paving the way” for others; in a way, to make it possible for succeeding generations of scholars and intellectuals to be able to think in categorically different and novel ways. This occurs not when one simply adds to the body of human knowledge, but rather when new ways of thinking and of discourse are rendered feasible.

In this sense, it could not have been a coincidence for Prof. İnalcık to have spoken about the Enlightenment that day—about Voltaire, Diderot, Rousseau and others. It was the thought of those figures that underpinned  the modalities of succeeding ages’ belief and value systems. And it seems to me that it would not be too grand a claim to say that Prof. İnalcık has now become, in similar fashion, a figure of enlightenment for our young generation today, most deserving of being recognized as a “true historian.”