[Preliminary. It had always been his mother’s dream to have her family live under the same roof.  Perhaps dream is too strong a word here — let’s hear this in terms of what it would connote in normal circumstances, i.e., something in line with aspiration, wish, intent or want.

It seems it was from this dream of his mother’s that his obsession, best encapsulated by the phrase “family comes first,” derived.  However, by family he often meant more than blood relatives, including those friends who were more family to him than many members of his extended — and at times close –family.

It was for this reason that he was struck by the irrefutable reality and utterly confusing purpose of existence — viz., suffering — for the first time, when his parents decided to call it quits.

The subsequent arrangement that this decision bore eventually led to an irony of sorts, as uncomfortable and wicked as the character of being-human.  He eventually identified himself with — or, better put, he believed completely comprehending — the nineteenth-century prophet of pessimism, who once wrote that “unless suffering is the direct and immediate object of life, our existence must entirely fail of its aim.”  The irony lay in that the prophet — like any prophet, for that matter — found it particularly difficult to get along with everyone, which included his mother.  His mother, in turn, got along very well with everyone — and when I say everyone, I mean the likes of Herr Goethe and Herr Hegel. 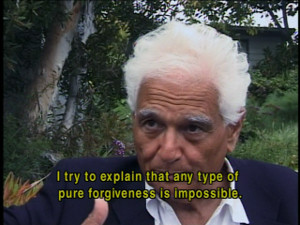 In any case, staying with father was initially deemed convenient for all parties. Mother had to start anew, or perhaps…well, perhaps she preferred it that way — could we ever know for sure?  Let us note that they did live in a society for which discrimination against women was the norm, and it was only normal for it to take time for her to win that roof under which her family would finally be together. Being-together turned out not to be enough for her — that is what he often said — they had to be wealthy, healthy and together. It seems that to him, wealth always took precedence over health, and often over unity — even if all three were musts in one way or another.

So, although he was almost thirty then, he continued living under that same roof, the one his mother provided. His maternal grandfather — his only living grandparent — was old, and he wished to be near his grandpa as long as he was around. Together, they enjoyed the comforts of the immediate circumstances of their existence. For him, the relationship he had with the space that home offered under that roof remained challenging, because spatiality of/between objects seldom guarantees spatiality/spaciousness for the subjects that dwell amidst them.

Nonetheless, he did enjoy their house — particularly their garden. Cultivating fruits, berries and vegetables, and growing roses, hydrangeas, magnolias, orchids, geraniums and other flowering plants, he enjoyed refuge from purpose to partake in a kind of apatheia and contemplative existence. And he looked after their cats and their dog; but, as he saw it, they looked after him as much as he did them — and so, he preferred to call it sharing, which together, they extended to friends, who were also family.]

The Point. This is a picture of our dog.  Her wait is over and this is the story of how a dog waits.

For about two months, it was she, our two cats and I that comprised the population of our house, as everyone else had left either for business or for leisure.  The first three weeks of that period were the most difficult for her, and I doubled the number of our walks, thinking it would cheer her up a bit. During those walks, she developed a heartbreaking habit — she would stop, sit and, looking away out into the road, she would sigh. She was waiting. She was waiting for the rest of her/our family to return. Sitting there, five, ten minutes at a time, she would then get up and begin walking back toward home, only to stop once more, sit, and go through the same ritual all over again.

She longed for the rest of her family — and unless they were together, it seemed she felt she had no family at all. 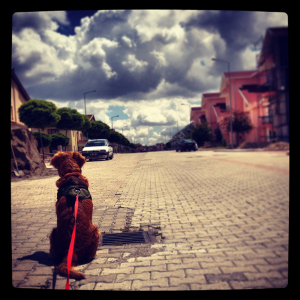 That you say, think or believe that family comes first is absolutely insignificant when you encounter an embodiment of the essential priority of family. This is an overwhelming experience, indicative of a disconnect from the truer in life.  And in any case, whoever said that one knows not what unconditional love (i.e., pure love) is, never having owned a dog — well, that person was spot on.

B: “Are you thinking what I’m thinking?”

B: “So, you’re not thinking what I’m thinking?”

From “We’re Both in Love With a Sexy Lady” by the almost-award-winning formerly-fourth-most-popular folk duo in New Zealand.]