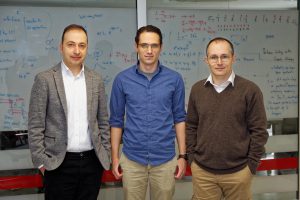 A team of scientists from Bilkent University may well have brought a fantastical feature from “Star Trek” a big step closer to realization. The holodeck envisioned in the sci-fi series allowed characters to enter a zone where they could immerse themselves in a simulated 3D environment. But in actuality, 3D holographic projection has proven difficult to achieve.

Now, researchers from the Department of Physics, the Department of Electrical and Electronics Engineering and the National Nanotechnology Research Center (UNAM) have used the principles of mathematics to overcome previous obstacles and demonstrate the first realistic 3D holograms that can be viewed from any angle. Their results were published in the April 2019 issue of Nature Photonics, under the title “Breaking Crosstalk Limits to Dynamic Holography Using Orthogonality of High-Dimensional Random Vectors.”

As the authors note, 3D holographic projection relies on back-to-back stacking of a large number of 2D images. However, interference, or “crosstalk” between the images makes the 3D projection fuzzy and far from realistic looking. Scientists working in this area have generally pinned their hopes on advances in optical technology to one day solve this problem.

But as Assoc. Prof. F. Ömer İlday (Departments of Physics and Electrical and Electronics Engineering and UNAM), a co-leader of the project, explains, the Bilkent team turned to mathematics for a solution. “The reason for the crosstalk is actually the mathematics, rather than the shortcomings of the physical components. Any pair of high-dimensional, mutually random vectors tend to be orthogonal – a consequence of the central limit theorem and the law of large numbers. We use this property, together with a neat but straightforward wavefront engineering trick, to add random phase to each image, in order to eliminate crosstalk without using any additional optics.”

Asst. Prof. Onur Tokel (Department of Physics and UNAM), the other co-leader, adds, “It wasn’t possible to simultaneously project a 3D object’s front, middle and back. We solved this issue through a simple connection between the equations developed by Jean-Baptiste Joseph Fourier and Augustin-Jean Fresnel in the early days of the field. Using this math property, we advanced the state of the art from the projection of only three or four images to a thousand simultaneous projections.”

The team believes that the full potential of holography may be unleashed if such a 3D capability is at hand. “Our holograms already surpass all previous digitally synthesized 3D holograms in every quality metric. Our method is universally applicable to all types of holographic media, be they static or dynamic holograms. Therefore, opportunities are vast. Immediate applications may be in 3D displays for medical visualization or air traffic control, but also laser–material interactions and microscopy,” says Asst. Prof. Serim İlday (UNAM).