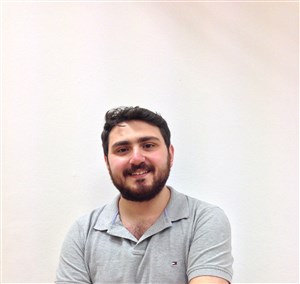 What were the main reasons that encouraged you to choose the Netherlands and VU (Vrije Universiteit Amsterdam)?

Actually, I didn’t think that much about where I would choose. I left this decision to the last minute, and I focused on finding a country that would be at the center of Europe and allow me to travel easily. Hence, I chose the Netherlands. Choosing a school wasn’t hard because there are 10 universities there, and almost all of them are outstanding.

How was life in Amsterdam in terms of cultural and social activities?

If I tried to talk about all the social and cultural activities there, I wouldn’t be able to finish. Life in Amsterdam is incredibly vibrant. I prepared an agenda listing the places I would go—if I hadn’t, I could have missed some quite good activities since there were a lot, and it wasn’t easy to remember all of them. Even just visiting museums would take a month there. Dutch people like having fun. You sometimes see mobile fun fairs or come across people having pillow fights. Thus, it’s quite a rich place in term of activities.

What is the average cost of living in Amsterdam for a student?

I guess the cost of living is the city’s most negative aspect. Amsterdam is the most expensive city in the country. Though it isn’t as expensive as Paris or London, it’s probably the next most expensive city after them. I spent a considerable amount in addition to the grant, approximately 400-500 euros more per month. This, of course, may have resulted from the choices I made while there. I stayed in a house rather than a dormitory. If you share a house with other people, you pay 400-500 euros per month (including utilities) on the average; you can stay in a dormitory for 300-400 euros per month.

Was it easy to find accommodations? Does the school offer dormitory rooms to exchange students?

Quite easy. Almost all the schools there arrange this for you. They provide you with some alternatives before you go. The reason why it is easy is because there are a lot of options with different price ranges. I recommend that you start looking without even waiting to see the school’s options. Also, because the Netherlands tries to attract international students, there are a lot of student dormitories. So I didn’t have any trouble in this respect.

How were the courses, projects and exams at VU compared to those at Bilkent?

We always say Bilkent is very hard, but when I was in the Netherlands, I saw that the Dutch system of education is much harder than that at Bilkent. At VU they divide a year into three terms, and the maximum number of courses you can take during a term is two. I really liked focusing on only two courses during a term after taking seven or eight courses a semester at Bilkent. The lecture hours at VU were also fewer than those at Bilkent. Students have to study the course material themselves; basically, students arrange and manage their own time. What is the language of instruction? Is it easy to find courses in English?

The Netherlands tries to attract international students, and because of that it’s very easy to find courses in English at all of the universities there. All of my courses were in English; there were a lot of other options for me, too. Finding a course in English is a bit difficult only in the law departments, since they teach their own legal system.

Does the school offer a language course for international students to teach them the local language?

VU offers its international students a paid Dutch course rather than a free, for-credit course. I didn’t take the Dutch course; as a matter of fact, you don’t have much motivation to learn Dutch in the Netherlands, because everyone, and I mean everyone, can speak English: butchers, greengrocers, elderly people and even homeless people. Only once during my stay did I come across a driver who couldn’t speak English. And I can say that Dutch people are very understanding toward foreigners; once they realize you’re a foreigner, they switch to English and try to help you as much as they can.

What was the most memorable thing about your Erasmus experience?

It’s quite hard to pick one thing when you’re trying to make every day of those five months special. But one night during my first week in the Netherlands was pretty memorable: I wasn’t wearing my glasses so I couldn’t see where I was going and had a bicycle accident. Someone approached me to help with my bicycle but stole my money instead. I tried to repair my bicycle myself, then got lost on my way home, and when I finally got to my house it was 7 a.m.! This isn’t a pleasant memory, but afterwards I kept thinking how much worse things could have happened. One piece of advice from me: you should definitely have health insurance.

What was the biggest challenge you had to deal with during your Erasmus exchange?

I didn’t stay in a dormitory; I stayed in a house. Living in a house is more independent than staying at a dormitory in terms of cleaning and cooking. I shared a house with a friend, and this brought with it responsibilities. I had to do things by myself. In the dormitories, employees clean your room, but in a house you have to do this yourself. For example, when I woke up, I thought about what I would cook for lunch and dinner. I don’t want to call this situation a challenge, but it was hard and taught me some useful lessons.

What special tips can you give for prospective Erasmus students who might choose VU?

If you were given another chance to go on an Erasmus exchange, would you take it? Would you choose VU again?

I would go again, but I won’t have such a chance. Therefore, I’ve applied to a master’s program in Amsterdam. There are offers from England, but most probably I’ll go to Amsterdam again because it’s a beautiful place to live.