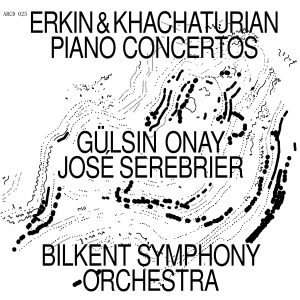 The Bilkent Symphony Orchestra has released a new CD featuring the piano concertos of Ulvi Cemal Erkin and Aram Khachaturian. The soloist on the recording is Gülsin Onay and the conductor is José Serebrier.

The CD’s liner notes observe that the Khachaturian and Erkin concertos are stellar examples of art music from Armenia and Turkey, respectively, composed on the basis of native musical traditions. “Both are pianistically demanding, effective and – in their drama and atmosphere – immediately comprehensible and riveting compositions.”

While the Khachaturian piece is currently one of the most popular concertos in Asian countries, according to the liner notes, Erkin’s concerto is almost unknown outside Turkey; the BSO release is the first commercially available recording.

Ms. Onay is one of Turkey’s most prominent classical musicians. She has already recorded the two piano concertos by Ahmed Adnan Saygun – along with Erkin a leading figure among the country’s composers – and performs internationally as a soloist.

José Serebrier, a US-American of Uruguyan descent, studied with Stokowski, Szell, Dorati and Monteux. He is one of the most recorded conductors of his generation, as well as a composer.

The Bilkent Symphony Orchestra has a large and varied catalogue of recordings, including many 20th-century Turkish masterpieces.