Assoc. Prof. Ömer İlday of the Departments of Electrical and Electronics Engineering and Physics, the Neuroscience Program and the National Nanotechnology Research Center (UNAM) at Bilkent has received a European Research Council Proof of Concept Grant. 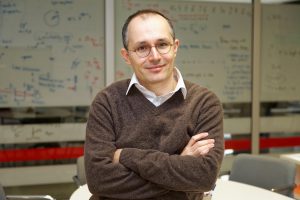 ERC Proof of Concept funding is available only to researchers who have already received an ERC award, with the aim of allowing them to establish proof of concept of an idea generated in the course of their previously funded project.

In Dr. İlday’s case, this was an ERC Consolidator Grant for a project titled “Nonlinear Laser Lithography (NLL),” effective 2014–2019, which explored the self-organized nanostructuring of materials using ultrafast laser pulses. In the course of this project, he developed the concept of nonlinear feedback–driven laser–material interactions, for which achievement he received a TÜBİTAK Science Award in 2017. One of the most important outcomes of this general method has been the invention of ablation-cooled laser–material interactions.

In his new ERC-funded project, titled “Supersonic,” Dr. İlday will explore new limits of these interactions. The ablation-cooled regime’s main novelty was to introduce the collective interaction of thousands of laser pulses with the material, in contrast to the traditional approach in which the pulses interacted individually. In this way, laser–material cutting and processing efficiencies were increased tenfold. The new supersonic regime aims to increase the material removal speed to the range of the speed of sound. This new regime should make it possible to reduce the pulse energies by a factor of around 100,000, radically simplifying laser architectures and potentially reducing the cost of laser manufacturing.