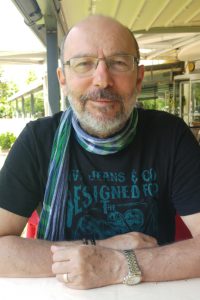 Why did you become a scientist?

The word “scientist” was not in our everyday vocabulary when we were in high school. It was a word associated with spectacular results mentioned on the radio or in the papers. We didn’t have TV then! Throughout my high school years I entertained the idea of several occupations for my future, but none appealed to me for more than a few months, and I would quickly change my plans in favor of a different profession. Meanwhile, my physics teacher was always complaining that I didn’t understand physical concepts and instead solved physics problems by treating them as math problems. One day she asked if I had ever considered being a mathematician. Why hadn’t I thought of it before? Math was easy and fun. Moreover, I would be making a living out of it. I never entertained any other ideas about my future after that. And the first time I was called a scientist was when I visited ICTP in Trieste. There, they call every visitor a scientist!

Please explain your current research for our readers.

One of my current research interests revolves around geometric objects called K3 surfaces. These are a special type of four-dimensional object that can be considered two-dimensional objects if you allow square roots of minus one, and that’s why they’re called surfaces. It’s a surprising fact that to understand and classify these surfaces, you need to understand how many times two curves on the surface intersect each other. Every K3 surface exhibits a different intersection panorama for its curves, and this panorama uniquely defines the K3 surface you’re working on. No other type of surface exhibits this behavior. The investigation and exploitation of this property necessarily require tools from algebra and number theory, in addition to the usual complex analytic tools of geometry. When you think you’re deeply involved in some complex analytic property of a K3 surface, you suddenly find out that the answer hinges on understanding a certain algebraic problem whose solution can be found in a number theory problem that was already solved two hundred years ago by good old Gauss when he was only twenty-four years old. Such “accidents” add to the already abundant excitement surrounding K3 surfaces.

Like all mathematicians, I also have other interesting problems in my mind and spend a lot of time thinking about them, but they’re the kind of problems you don’t talk about until you actually solve them!

Why is your research important?

What does “important” mean? Science and art live lives of their own, oblivious to mundane problems. When a concept is fully understood, in science or in art, the results penetrate to the physical and social sciences and from there eventually to engineering and politics. Then one day you start using solar cells and smartphones. Twentieth-century electrical engineering wouldn’t have been possible if in the 16th century Cardano hadn’t fooled around with the idea of finding two numbers whose sum is 10 but whose product is 40. (Try it!) Was Cardano’s work important when he worked on it? Yes, but only for a very few people who were capable of understanding what he was talking about. If you asked him, “Why is your research important?” he would reply, “This isn’t research, this is fun, let me show you….” So my work is fun; I have no idea whether it will one day find itself in engineers’ textbooks, and, frankly, I don’t care.

Do you have an analogy to help us understand your work?

To understand why you need complex numbers along with real numbers, think about a polynomial of a single variable. Can you find its roots? Generally you can’t; in fact, you can’t even decide how many real roots it has, but if you accept complex numbers, then every polynomial always has as many roots as its degree. Now we have a nice theory.

Next, think about polynomials of several variables. Can you find their roots? Probably not, but you can still describe how the solutions, mostly infinite in number, “sit around” in space. For example, if you add up the fourth powers of each coordinate in a complex projective space and look at the points where this sum vanishes, you get a K3 surface. It has exactly forty-eight straight lines lying on it. No one can see this, since the whole story takes place in a six-dimensional space, but nonetheless we can know what happens there. Now that’s cool!

What’s your best work, or your most important scientific finding so far?

Every time you finish a project, you realize that even though it’s better than anything you’ve done so far, it’s not good enough – the best is yet to come.

What excites you about your work? What’s the coolest thing about it?

One of the most charming aspects of mathematics is the existence of proofs and the power this gives you. For example, you can prove that between any number and its double, there’s definitely a prime number. (Google “prime number”!) Now, you didn’t arrive at this fact by trying out every number and its double – that’s impossible. You proved it. Now you know, without actually checking, that no matter which number I give you, there’s a prime between it and its double. Knowledge is power.

Could you share a turning point or defining moment in your work as a scientist?

I believe that the only lifesaving turning point for every scientist is when your PhD problem gets solved on one otherwise insignificant day in your life as a miserable graduate student. Its joy remains with you for the rest of your life. In fact, it becomes addictive; you want to solve another problem and relive that joy again, and again. That’s why scientists, and in particular mathematicians, never actually retire. They keep chasing solutions to interesting problems. We all dream that we’ll meet our death the way our great master Euler faced his. (Again, I refer you to Google!)

What’s been the most exciting moment of your career so far?

When I was a graduate student, I was attending a conference whose subject had nothing to do with my graduate work. There, one night before I went to bed, I saw how to solve my PhD problem. I still go to irrelevant talks and think about my big problems, and occasionally it works.

What’s one bit of science from your field that you think everyone should know?

Mathematics is the art of thinking correctly about anything. It’s about concepts and how concepts relate to each other. If occasionally a formula pops up, it’s only to make life easier, despite the common belief against this.

When and where do you do your best thinking? What distracts you?

In bed, just before I fall asleep. The bad news on TV haunts me for a long time, and I can’t concentrate on my math. When I manage to bypass news programs on TV, I can continue to think about K3 surfaces and other things that I won’t mention until after I solve them.

Why/how did you choose Bilkent? What do you like the most about being here?

At the time I received an offer from Bilkent, I was working as a junior researcher at Gebze, and Bilkent was a new experiment for Turkey, as its only private university. Almost all of our friends at state universities disliked Bilkent and those who went to work there. If you joined the Bilkent faculty, and the other universities subsequently managed to choke Bilkent, then you wouldn’t be able to find a job at any other university. On the other hand, Bilkent was offering high salaries and making attractive promises regarding library facilities. Moreover, you would be joining a truly exceptional team of academics.

So, in a courageous moment, I accepted Bilkent’s offer. My friends at other universities kept telling me they wouldn’t employ me after Bilkent collapsed, long after it was clear that Bilkent was here to stay. Now, with so many other private universities around, such hostilities are long gone and forgotten.

What I like most at Bilkent is that it’s managed by a team that knows what science, art and engineering mean. Academic work always has priority at Bilkent, and this is the kind of environment where you want to study pure math. At Bilkent, the only time someone asks you whether your research is important is in a newspaper interview! What more can an academic ask for?

What problem do you hope scientists will have solved by the end of the century?

I expect biologists to fully understand two things before the end of this century: viruses and the human immune system. I also expect physicists to find ways of capturing the past within the creases of the space–time universe and show us exactly what happened in history, so that I’ll know all about Euclid. In math we all look forward to the full understanding and eventual solution of the Riemann hypothesis. (No, I’m not working on it!)

When I talk about solving research problems, some of my friends think I’m talking about solving the exercise problems that appear at the end of every chapter in math books, and they ask if I haven’t solved them all yet. That’s probably the most entertaining misconception about math that I meet.

If you’re a mathematician your brain always works, sometimes in the background. It’s not uncommon that while you’re watching TV, you suddenly discover a solution to a problem that’s been bugging you for some time. Actually, it’s not “suddenly,” because your brain didn’t really stop thinking about it, even though you thought you did. So when I think I’m not doing mathematics, I read novels and watch movies. The book I read most recently is John Grisham’s new thriller “The Reckoning,” and the movie I watched most recently is Milos Forman’s “Amadeus” (for probably the fifth time, and still with full emotional engagement).

Any advice for students starting their careers?

My advice is, always be true to yourself. And work hard. As Cem Yılmaz says, the only difference between successful people and others is that successful people work ceaselessly. Michelangelo said, “If people knew how hard I had to work to gain my mastery, it would not seem so wonderful at all.” And the 20th-century columnist Earl Wilson said, “Success is simply a matter of luck. Ask any failure.” So find what you love, and let it kill you.