Efe Tokdemir joined Bilkent University in 2018 as an assistant professor in the Department of International Relations. He holds a BA in political science and international relations from Boğaziçi University and a PhD in political science from Binghamton University (SUNY). His research and teaching interests include conflict processes, specifically nonviolent strategies in civil war; foreign policy and public opinion; international politics of the Middle East; and quantitative methods. Previously a postdoctoral visiting scholar at The Ohio State University’s Mershon Center for International Security Studies, Dr. Tokdemir is a recipient of the International Studies Association’s James N. Rosenau Fellowship. He also recently received a Young Scientist Award from the Science Academy in Turkey (Bilim Akademisi Genç Bilim İnsanları Ödül Programı). 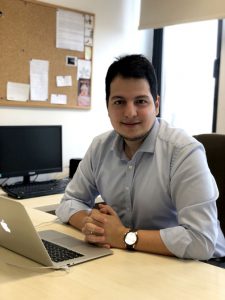 Let’s say it was path dependency.  When I was an undergrad, I was working in a think tank, having lots of fun researching and forecasting policy implementations. My ultimate goal was to work in an international organization, and weirdly enough I had no plans to pursue an academic career. This is partly because I always thought that I’d never be able to spend a day in an office alone, reading and writing the whole time. Then, I came up with the smartest idea of applying to funded PhD programs and getting the MA as a terminal degree, thinking that a master’s degree would improve my chances of building a career in an international organization. Instead, I ended up staying in academia, mainly for two reasons. First, in a doctoral program, other options become less viable, since many programs prepare you to become a professor. Second, I realized that I really enjoyed researching and working on my own schedule without strict supervision from a boss. So, as you can see, mine was not a “dream job” story.

Why/how did you choose Bilkent? / What do you like the most about being at Bilkent?

I was in the job market during my degree year and applied for some positions in North America and Europe. A former professor of mine told me that Bilkent IR had an opening, and that it would be a good match for my academic profile. When I first arrived on campus, returning to Turkey was not my priority. However, having been warmly welcomed here, seen the campus, and been informed about the working conditions and opportunities, I was eager to take the offer at the end of my two-day visit.

To many people’s surprise, I like living here, even though I’m from İstanbul. I enjoy the benefits of living on campus to the fullest. Plus, I really appreciate what the academic environment at Bilkent offers to a junior faculty member in the early stage of his career.

I’m currently working on multiple projects. As I said, I prefer not to work alone. So, I have many collaborators, and we conduct various projects. All of them revolve around the same theme, though: individuals’ attitudinal and behavioral responses to the nonviolent vs. violent strategies of states and non-state armed actors. Hence, in one project, I’m focusing on the impact of foreign aid, and in another, on rebel governance. Sometimes it’s not easy for my colleagues to understand what my central focus is; yet, I enjoy not sticking with only one theme in a specific region during a particular time period.

Yet to come, I hope. The problem is that most of the time, we scholars spend at least two to three years on an article: the idea pops up in your mind, you conduct research on it, collect data, analyze the data, write the article, revise it thoroughly, send it to a journal, get a rejection, revise and resend it, get it accepted, polish the final version, and then wait for it to be published. As you see, it’s a long journey. Plus, the more time you spend on it, the more you realize the problems with it and start criticizing your own work. So, I hope my best work is just around the corner.

Conducting research is the best part. This is the creative part of academia. You come up with an idea, and it’s totally up to you how you process it. And actually, that process itself defines the quality of the outcome. The better your idea is and the more creative you are in your research, the better the result is. And of course, each article has its own uniqueness. Sometimes you need to collect data from public databases, other times you need to learn how to scrape observations from Twitter, or design an experiment to be conducted in the field, or spend time interviewing professionals or ordinary people. So, lots of novelty, no repetition and constant interaction with others. And on top of everything, it’s all your responsibility, without having to follow orders from others, which is the coolest thing, if you ask me.

Accepting a PhD offer over existing MA offers was definitely a turning point, for the reasons I explained above. If I haven’t accepted that offer, I don’t think I would have ended up being a scholar.

What has been the most exciting moment of your career so far?

Receiving a postdoctoral fellowship prior to starting my post at Bilkent. It effectively meant that I could spend one year with no teaching load, giving me a smooth transition from being a graduate student to becoming a faculty member, and allowing me to complete my incomplete projects. Thanks to that fellowship year, I managed to write my book, for example. I like teaching, and being with our students, but let’s be honest, it’s also fantastic to be able to focus solely on your research.

Everything is political, and nothing is beyond politics! And when we say politics, it should be defined broadly. Any human interaction involves power relations, calculations, resource allocations, etc. In our field, we don’t teach merely about two states’ interactions with each other. It’s more than that, I believe, because many of our theories are applicable, with minor revisions, to various aspects of life.

In my office, in front of a huge whiteboard! I need silence, and lots of empty space to draw boxes and arrows and write equations.

Once I start working, almost nothing! However, any kind of voice can distract me when I’m trying to focus. I can’t work in a coffee shop or listen to music while working.

My forthcoming book and summer vacation plans; but to be honest, I’m more curious about the latter. It’s been a great academic year so far, with so many scholarly and personal developments, which means it’s been a bit tiring as well.

People think that international relations and political science are all about reading a lot and speaking eloquently. (I guess this misconception is augmented in particular by the debate programs on TV.) Well, this might have been the case once, but we live in a different era, and our field is very adaptable to the new developments. You need novel skills, not just a deep interest in politics.

Mostly spend time with my family and friends, experiment with cooking and, very recently, play with my daughter. I’m a huge Galatasaray fan, so watching the Galatasaray games and reading about club management and sports finance are among my leisure activities.

What books have influenced you the most, and why?

Recently, “Sympathizer” by Viet Thanh Nguyen. It’s a great novel and offers a foreigner’s perspective on living within the American culture. While reading it, I actually felt like someone was summarizing my feelings during the time I spent abroad. Other than that, “Crime and Punishment” and “1984” were also very influential when I first read them during my high school years.

I originally wanted to work in the foreign service. Yet, when the time came to think seriously about my career, I thought that life as a diplomat wouldn’t be easy. After all, I was the son of a military officer, and I knew how it felt to constantly move around and to work under rigid authority.

The most difficult question! I guess it’s all about your expectations from life. What I’m trying to do is balance them. In fact, whenever I don’t feel happy, I realize that it’s because I initially had very high and unrealistic expectations. I think that maximalist approaches such as “ask whatever you can from life” aren’t very useful; only a small number of people can manage to acquire whatever they want and be happy, with the rest destined to unhappiness under this formulation.

Two things: 1) Make smart investments in yourself. Instead of trying to learn your third or fourth foreign language, focus on one and excel in it.  Also, try to take more classes in psychology and economics, and learn coding as early as possible. 2) Don’t get into a race with time. Over time, I’ve come to the conclusion that “losing a year” is not a valid concept. I could have pursued a separate MA degree before going on to get a PhD, for example, rather than entering an integrated MA/PhD program; or, I could have taken an extra year in the program. I thought it would be a “waste of time” – and I was wrong. Having played football manager games so much when I was younger, and gotten obsessed with the young talents under 21, I used to think that accomplishing something big at a very young age would be worthwhile. However, unless you’re a sportsman, it’s really unlikely that you’ll “lose” time just because you’re a year older or graduate a year later.