Asst. Prof. Victor Lenthe, who teaches in the Program in Cultures, Civilizations and Ideas, joined the Bilkent faculty in 2017 after finishing his PhD at the University of Wisconsin (USA). His research focuses on early modern English literature, in particular the writings of Shakespeare, and its relationship to the history of political thought. Dr. Lenthe’s current book project, “Against Consensus: The Poetics of Collective Agreement, England c. 1600,” contributes a literary and philological perspective on the idea of political consensus by examining writers who interrogated the meaning and value of collective agreement in the culturally divided society of Reformation England. At Bilkent, he frequently teaches courses focusing on the works of writers such as William Shakespeare, Michel de Montaigne and John Locke. 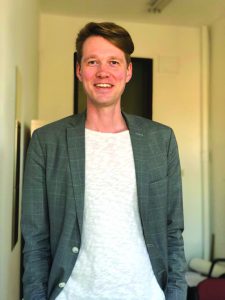 The combination of research and teaching. Being able to devote half my day to researching and writing about topics I’m interested in is a huge privilege, but I also love spending time in the classroom. I get such a kick out of being the center of attention while also being able to control the environment. It gives me the social stimuli I need as an extrovert without being too overwhelming. I also love arguing with smart people about ideas, and at Bilkent I have plenty of opportunity for that.

Why/how did you choose Bilkent?

After finishing my PhD, I applied to all of the positions that were advertised in my field, including Bilkent CCI. At that time I had a friend living in İstanbul who spoke highly of the university. One thing that made me a good fit for this position is that in addition to having studied English literature, I also have some credentials in political theory.

I have an article coming out later this year on Shakespeare’s ideas about consensus, which probably comes as close to making a theoretical contribution as I’ll ever get. Basically I show that one of Shakespeare’s comedies lifts motifs and passages from early modern controversies about this idea, and that it rearranges them in a playful way that takes them seriously, but not too seriously. I think it’s a valuable approach to philosophical debates that (in slightly different forms) are still with us today. Another article of mine is about King James’s rationale for restraining a man who started giving politically subversive sermons in his sleep in 1605. It just got published in “Studies in Philology” and uses manuscript sources to make sense of a really strange story that forced contemporaries to rethink the relationship between religion and politics. I’m not saying they were right, just that they had some interesting ideas.

I like arguing. In my discipline we make interpretive arguments – arguments that can keep on going for a really long time and are rarely settled. I also love Shakespeare. I love his approach as an intellectual to a lot of questions and concepts that are still with us today. But unlike with normal philosophy, his ideas have a certain playfulness that I think can be really valuable.

Getting this job at Bilkent! I was a graduate student and now I’m a faculty member, which is a step up. Moving to Turkey was cool too. So really the transition was a step up in two different ways. Ne mutlu Türküm diyene! (My friends taught me that phrase.)

I do my best thinking when I’m at my computer, writing.

If people message me on WhatsApp, then I feel like I have to respond. Also checking how many likes my most recent Instagram selfie got. (I take really bad selfies, but my friends give me likes anyway.)

That we always love the books we study. Sometimes we do, of course. But I also work on lots of books that are interesting to think about without being fun to read.

I like to go to cafés and talk with friends!

One is “The Inclusion of the Other” by Jürgen Habermas, which proposes an idea of political legitimacy called consensus politics in which the government is legitimated by the consensus of the people who are being governed; this is a beautiful idea. Another is Chantal Mouffe’s critique of Habermas, “The Return of the Political.” Mouffe argues that it’s a mistake to seek consensus, because any appeal to what people in general agree on excludes and marginalizes dissenters (and inevitably there are always some). The disagreement between the two thinkers is really not possible to solve—as I say, I like arguing!

Browse more books! When I was younger, I had this mindset that I had to read a book from start to finish in order for it to matter. However, I think there’s a lot you can get from a book – sometimes even the main idea – by reading just a few pages. And even just a small sample of someone’s ideas can leave you with something valuable.