Food’s Globalization Has a Long History 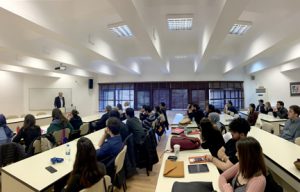 On April 11, Teoman Hünal, a well-known gourmet, writer, entrepreneur and TV presenter, visited Bilkent to give a lecture titled “Globalization and Gastronomy” as part of the ECON460 Economics of Globalization course. The Faculty of Economics, Administrative and Social Sciences and the Department of Tourism and Hotel Management cohosted the event.

In his presentation, Mr. Hünal noted that globalization in the restaurant business started with explorers and colonists and continued with the Industrial Revolution. As the world became more and more connected, food found a way to spread far and wide. Food culture today is no longer tied down to the place of origin. From the discovery of avocados in the Mexican cuisine to the introduction of tomatoes from Peru, new flavors and ingredients changed national habits, recipes, and even entire cuisines and food cultures.

Today, Mr. Hünal declared, it is difficult to draw the line between what is truly traditional and what is imported. He concluded by stating that with the world gastronomy moving toward the use of produce that is local but not necessarily traditional, “glocal” seems to be where the future lies. The talk was followed by a question and answer session, in which students and faculty members discussed the positive and negative impacts of globalization on gastronomy.

Mr. Hünal’s visit also included a luncheon at the Department of Tourism and Hotel Management’s practice restaurant, Le Piment Rouge, where students of the department prepared and served examples from the American cuisine under the supervision of Chef Instructor Elif Denizci and Service Instructor Ali Ünal. 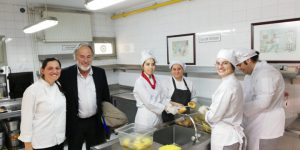