05 March 2019 Comments Off on Musical Tributes to İhsan Doğramacı

During the past week, two commemorative concerts were held at Bilkent to mark the ninth anniversary of the passing of Bilkent University’s founder, Prof. İhsan Doğramacı.

On the evening of February 25, the Bilkent Symphony Orchestra gave a concert dedicated to the memory of Prof. Doğramacı, who was a lifelong music lover. The orchestra, conducted by Gürer Aykal, performed pieces by Chausson, Rachmaninov and Brahms, with Emre Yavuz as piano soloist and Elvin Hoxha Ganiyev as violin soloist.

An additional musical event in memory of Prof. Doğramacı took place later in the week, on February 27. The Bilkent Music Days series offered a “Tribute to Hocabey,” with Schubert’s Symphony No. 8 (“Unfinished”) played by the Bilkent Youth Symphony Orchestra under the baton of Rustam Rahmedov and featuring Bilkent FMPA soloists. 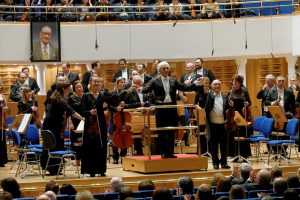 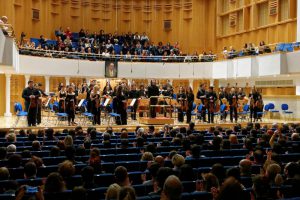