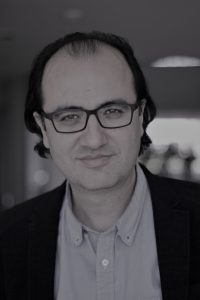 A work by composer Onur Türkmen – an assistant professor in the Department of Music and an associate dean of the Faculty of Music and Performing Arts – is on the schedule of concerts for the Netherlands’ high-profile contemporary music festival November Music. A performance of Dr. Türkmen’s ritualistic drama “Songs From a Circle” will take place during this year’s festival on November 4.

Dr. Türkmen, who graduated in composition from the Berklee College of Music and also studied with Pieter Snapper and Ilhan Usmanbas at the Center for Advanced Studies in Music at İstanbul Technical University, is known for his innovative use of the makams and instruments characteristic of Turkish music. Most recently, he has composed two ritualistic dramas, which investigate the intricate relationship of poetry, ritual and drama.

“Songs From a Circle,” for which Dr. Türkmen received an Eduart van Beinum Foundation grant, is a ritualistic drama for one performer, who both plays the violin and sings. Conceived as a ritual dedicated to “melancholia,” it features settings of verses from works by six famous poets in three scenes.

The piece was composed for Dutch artist Diamanda Dramm, who performed it during her solo tour in 2018 at classical music venues in the Netherlands that included the Concertgebouw Amsterdam. A part of the work was also broadcast on the national radio channel NPO 4.