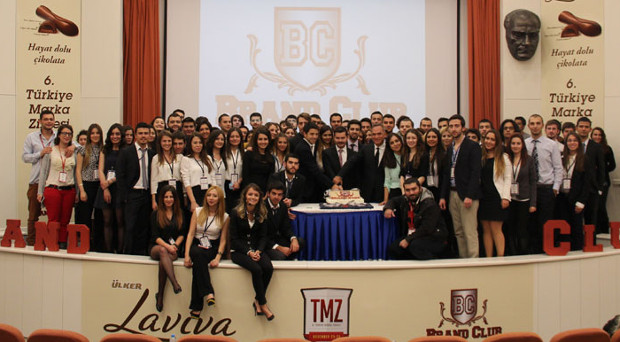 This past weekend, the sixth Brand Summit took place at Bilkent University. This annual event is a brand management symposium organized by the Brand Club, a Bilkent student organization. This year’s summit was held on November 23-24. An audience of over 250 invited attendees from Bilkent University, as well as other universities including TOBB, Başkent, Anadolu, METU, Hacettepe, Atılım, Işık and TED, filled Mithat Çoruh Auditorium to hear talks by a stellar group of speakers. Many of them are names behind the creation and presence of well-known brands in Turkey.

Vice Rector Kürşat Aydoğan gave the opening speech, noting that the Brand Club has created its own brand in only six years.

Following this, Bilkent instructor Dr. Elif Özdilek presented her insights regarding the definition of a brand, stating that it is an image that we like and even love, and do not relinquish. She also discussed how brands preserve their existence in the 21st century. Next, Ahmet Özkokur, a member of Yıldız Holding’s board of directors and vice president of the company’s chocolate department, talked about Yıldız’s Ülker brand. In his presentation, Mr. Özokur reviewed Ülker’s first years and recalled past marketing campaigns revolving around such themes as, “Daddy, don’t forget to bring home some Ülker this evening” and “Teatime without Ülker is unthinkable.” He concluded that Ülker has changed over time because people’s priorities have changed, making the point that such priorities shape brands’ images in society.

The first day also included presentations by Vahap Küçük, chairman of LC Waikiki’s board of directors, who talked about how LC Waikiki evolved from a French brand into a Turkish one, and Nadir Güllü, chairman of Karaköy Güllüoğlu’s board of directors, who explained how he made the famous Turkish dessert baklava into a brand known around the world (and also handed out a few boxes of his baklava to the audience). The day closed with a human resources panel presentation by Levent Akdeniz, Esra Altun and Canan Hotanoğlu, which emphasized the importance of social media in the 21st-century business arena.

On the second day of the event, Koray Bebekoğlu, head of strategic marketing and corporate communication at Doğuş Otomotiv, and Caner Dikici, head of TAB GIDA, spoke about their companies’ brands and how these brands have achieved their current prominence in Turkey. In separate talks, both Fatih Portakal, news presenter for Fox TV, and Fatih İşbecer, CEO of Pozitron, stressed the importance of risk taking and patience in personal success as well as in branding. Rıfat Oğuz, customer relationships manager at Turkcell, highlighted the factors that make a brand famous and, at the end of his talk, gave out three Turkcell tablets to students in the audience. The final presentation of the summit was given by Ata Köseoğlu, head of the strategy and business development group at Sabancı Holding, who offered his views on branding.