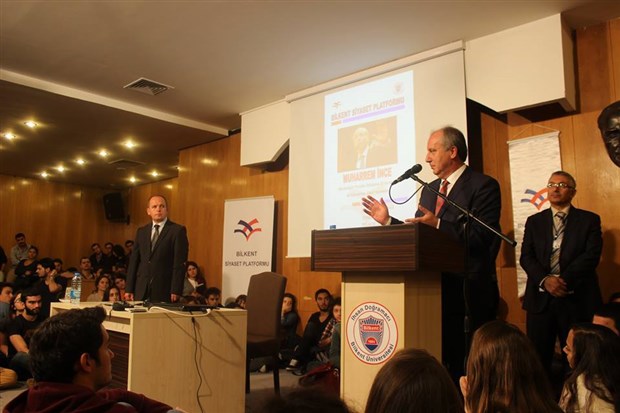 On October 2, the deputy chairman of the CHP parliamentary group, Muharrem İnce, came to Bilkent at the invitation of the Siyaset Platformu Kulübü to give a lecture and answer students’ questions. A considerable number of students and faculty members came to hear his remarks.
Mr. İnce reviewed several of the reasons why the CHP is in the opposition rather than the government, on some points criticizing his own party. He also discussed what he considers to be the government’s incorrect policies and actions, particularly its actions aimed at changing existing institutions in Turkey, including the judiciary, parliament and the media. He contended that the media and the courts are highly partisan in favor of the government.
At the end of the lecture, Mr. İnce expressed his gratitude for the opportunity to speak before the Bilkent community, thanked the Bilkent Siyaset Platformu Kulübü and accepted a plaque from Prof. Metin Heper of the Department of Political Science and Public Administration.