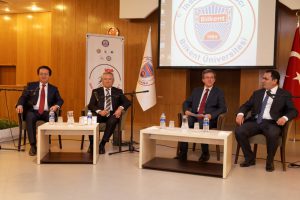 On April 18, FEASS students received a firsthand account of the work of public administrators and the career path that might lead them to a district or even a provincial governorship one day when several government officials, including Ankara Governor Ercan Topaca, visited Bilkent to give a panel  addressing the question “Shall I Become a District Governor?”

After welcoming by Rector Abdullah Atalar, Mr. Topaca began the panel by reviewing the authority and duties of a provincial governor, as well as the challenges of serving in that position. He also discussed the requirements for successful performance of the job, including an excellent education and communication skills.

The following speakers were Saffet Arıkan Bedük, former governor and member of Parliament and currently  president of the Turkish Administrators’ Association, and Çankaya District Governor Kadir Çakır. Mr. Bedük and Mr. Çakır discussed in detail the everyday issues and responsibilities facing provincial and district governors in their work.

Next, Selim Çapar, head of the Center for Research and Studies in the Ministry of the Interior, provided details on the process by which an individual may become a governor, starting with a three-year training period after entering the Ministry of the Interior. Finally, İsmail Özkan, a Bilkent graduate who is serving in the Interior Ministry as deputy head of the European Affairs and External Affairs Office, spoke about how his learning experience in the Department of Political Science and Public Administration at Bilkent had prepared him for his job.