17 December 2018 Comments Off on TDP Campaign Draws Attention to a Serious Problem: Violence Against Women 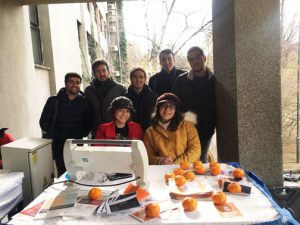 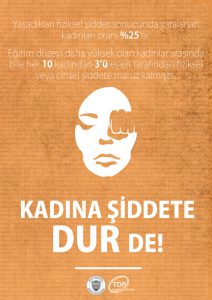 Last week, the student volunteer organization TDP (Toplumsal Duyarlılık Projeleri/Social Awareness Projects) held a campaign to raise awareness about violence against women. At a stand set up in front of A Building, volunteers gave out leaflets, answered questions and offered mandarin oranges as a thank-you to those who stopped by to express their interest and concern.

While the students who staffed the stand included volunteers from a number of TDP projects, those from the Düşler Evi Projesi – a project that reaches out to women and children who have experienced violence – were especially well-placed to provide information on the realities of violence against women in Turkey.

The main goal of the campaign was to make Bilkent students more aware of just how common and serious the problem is. To this end, the leaflets handed out at the stand included the following statistics:

– Forty-two percent of women in Turkey have faced violence at least once in their lives.

– Only 34 percent of victims share their experiences with family or friends.

– One out of every 10 women has faced violence while pregnant.

– Seven percent of women are sexually harassed before the age of 15.