We all know that saying “thank you” is a good thing. Our parents have been telling us all our lives to be grateful. And whenever we get upset, there’s always someone who reminds us how we should instead be grateful (although this apparently great advice doesn’t always work). We know that it’s beneficial to be thankful for stuff; the science also supports this.

Research in positive psychology has long associated gratitude with life satisfaction and overall happiness. Simply saying thank you can integrate us into social groups, making us seem trustworthy. It bonds us to others. In a work setting, a manager who says thank you often can motivate her employees significantly.

We know this, science supports it, yet we don’t say it

We don’t. In a 2018 study, researchers used hidden cameras to record conversations in community spaces. They found that the words “thank you” appeared only 14 percent of the time when the situation seemed to warrant it. 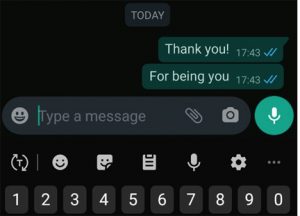 Why do we so often choose not to express our gratitude?

We have two common excuses. One, we tend to assume people already know how we feel; and two, we often think they would find it awkward if we explicitly said thank you to them.

Interesting research published in the journal Psychological Science showed that people are terrible at predicting how much others will enjoy being thanked. After completing the very simple task of writing thank-you letters, participants guessed how much the recipients might appreciate them, and their guesses fell short of what the recipients’ responses indicated that they

actually felt. Also, the letter writers stated that they worried about choosing the right words so as not to make things “awkward” when expressing their gratitude. The recipients, on the other hand, appeared not to care about this at all. They were simply pleased.

We see cooperation as the norm, and so we underestimate the effect of an explicitly stated thank you. So as not to go against the norm or seem too “excited,” we avoid saying those words. If we knew how great they’d make the other person feel, we’d probably say them more often. We assume people can read our minds, but they can’t.

When I observed myself, I saw how I was changing the words to make them sound light or humorous instead of being direct. I’m trying to be more explicit now, and I’ve already observed how people seem delighted and how it leads to better communication in so many ways.

-Practice saying thank you. Try being more explicit verbally, or even be old school and try writing thank-you notes as well.

-When for some reason you can’t thank someone verbally, try doing it mentally.

-Learning not to take others’ good deeds for granted may help us to in general not take the good in our lives for granted. In this regard, many psychologists recommend keeping daily gratitude journals, but if that seems like too much work, you can make a deal with a friend and tell each other about one thing you feel grateful for each day.

Thank you for reading!