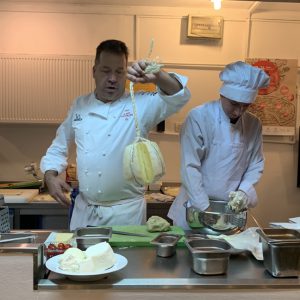 Recently, students in the Department of Tourism and Hotel Management had the opportunity to get both culinary and career tips from a chef at the top of his profession. Christoph Bob, who has worked at several Michelin-starred restaurants and is currently executive chef at the newly starred Monastero Santa Rosa on Italy’s Amalfi coast, visited the department to share his experiences as well as secrets of Italian cooking with students.

Mr. Bob was in Ankara for Italian Culinary Days, November 19–23, organized by the Ankara Hilton and the Embassy of Italy. The chef created a menu featuring examples of Italian cuisine to be offered at the Hilton’s restaurant during those days.

At Bilkent, he presented a lecture in the THM department’s demo kitchen, showing students how to prepare signature Italian dishes such as ravioli and risotto. He also gave more general advice on working in the culinary field, highlighting the importance of creating tastes that will remain in patrons’ memories. With a career that has included positions at restaurants in London, Zurich and Paris as well as several locations in Italy, and stints as sous chef and chef de cuisine at other Michelin-starred restaurants before assuming the role of executive chef at Monastero Santa Rosa, Mr. Bob was well-positioned to offer guidance to students looking forward to beginning their own careers in the culinary and hospitality fields.