03 March 2020 Comments Off on Tribute Paid to Prof. İhsan Doğramacı

Last week, a number of commemorative events were held at Bilkent to mark the 10th anniversary of the passing of Bilkent University’s founder, Prof. İhsan Doğramacı. These included a panel discussion and two concerts. 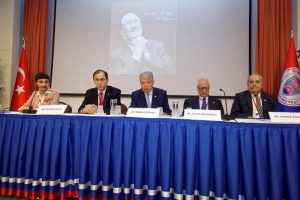 The first to speak was Prof. Hasanoğlu, who reviewed İhsan Doğramacı’s life story and his contributions in many fields.

Next, Prof. Zülfikar highlighted Prof. Doğramacı’s contributions to the Turkish language and culture in particular, and his services in this area. “In addition to being an entrepreneur, a builder and a productive scientist, Hocabey also was a cultured man,” he noted. “I can also say that he was an admirer of the Turkish language.”

Returning to a broader theme, Prof. Kutluk’s remarks focused on Prof. Doğramacı’s services to humanity. He recalled him saying, “What more can a mortal ask for, besides serving humanity?” This was, he said, Prof. Doğramacı’s main goal in life. Exemplifying the enduring nature of his drive to serve was a visit the two men along with a commission made to Afghanistan for humanitarian purposes when Prof. Doğramacı was 87 years old. 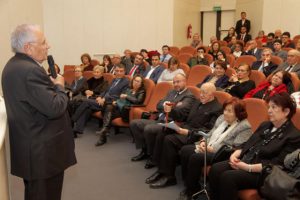 The next panelist was Dr. Özyürek, who spoke about Prof. Doğramacı’s contributions to the Turkish world and education. “Hocabey spent his entire life serving humanity, especially children, youth and teachers,” he declared. “For all these services, he will never be forgotten.”

Faculty of Education graduate student Edanur Akyüz made the panel’s final presentation. She talked about Prof. Doğramacı from a student’s perspective, observing that he “always pursued the path of innovation and change – he was never afraid to do this. I think we, as youth, must follow his path.”

Following the formal panel, two other guest speakers – retired professor of pediatrics Şinasi Özsoylu and former minister of national defense Vecdi Gönül – took the stage to make brief remarks, in which they shared their memories of Prof. Doğramacı. 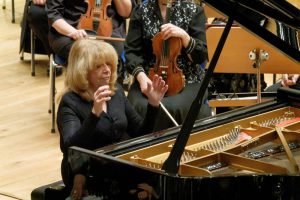 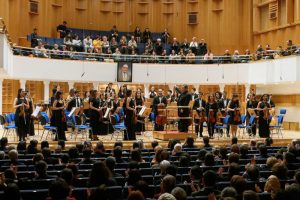 Also on February 25, in the evening, the Bilkent Symphony Orchestra gave a concert dedicated to the memory of Prof. Doğramacı. The orchestra, conducted by Gürer Aykal, performed pieces by Beethoven, with İdil Biret as piano soloist.

The commemorations concluded on the evening of February 29, when the Bilkent Chamber Music Days series offered a “Tribute to Hocabey,” with the Bilkent Symphony Youth Orchestra, under the baton of conductor Işın Metin, playing Mozart’s Symphony No. 35, Tchaikovsky’s “Variations on a Rococo Theme” and Beethoven’s “Leonore” Overture No. 3.