27 February 2018 Comments Off on Tribute Paid to Prof. İhsan Doğramacı 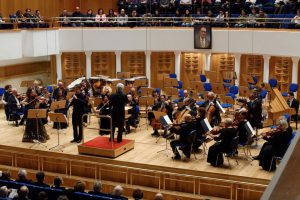 During the past week, a number of commemorative events were held at Bilkent to mark the eighth anniversary of the passing of Bilkent University’s founder, Prof. İhsan Doğramacı. These included two panel discussions and two concerts.

The panels took place on February 22 and 26. The Main Library hosted the first panel, during which Prof. Adnan Akay, Dr. Phyllis Erdoğan and Dr. Işın Metin discussed the topic “İhsan Doğramacı’s Approach to Communication: Multiple Languages, Including Music” and shared their memories of Hocabey (as Prof. Doğramacı was affectionately known).

In her remarks, Dr. Erdoğan highlighted Prof. Doğramacı’s extraordinary talents as a communicator. “He was a great linguist,” she recalled. “And he had lots of plans; he was always thinking of the future and had many ideas, many projects, which he loved to share with people. He was an eager communicator to anyone.

“Prof. Doğramacı was a good example of taking opportunities that come your way and realizing how effective communication can help you in your personal and professional life. My big opportunity was meeting him and working with him for 40 years.” 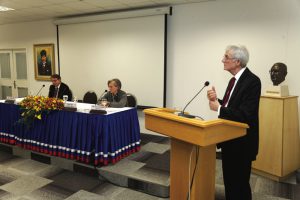 As a conductor, Dr. Metin focused on the musical aspect of the topic, stating that “music was yet one more language Hocabey cherished. For him, music was the language of the heart, a means of directly communicating feelings, ideas and, of course, culture.”

Prof. Akay, in reviewing Prof.  Doğramacı’s legacy, took yet another approach by noting that the institutions and facilities he founded promoted communication across cultures and across time. “In addition to Bilkent and Hacettepe, among Hocabey’s greatest gifts to us is the library – a resource for the better understanding of others, offering examples of how people thought centuries ago. Another such gift is the Bilkent Symphony Orchestra, not only a source of indescribable joy but also a platform for another important language of communication, as we have heard: music.”

The second panel, titled “İhsan Doğramacı Through the Eyes of Youth, and the Place of Turkmen in the Turkish World,” was held on February 26. The panelists were Tümerkan Akın (LAW/IV), Halil Kerem Aydın (POLS/III) and Dr. Rasim Özyürek (Director of Training Programs for Regional Countries) and the moderator was Kamer Rodoplu (Dean of Students). 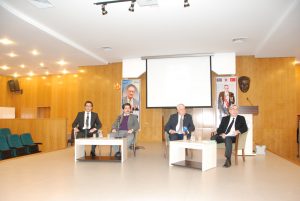 Given Prof. Doğramacı’s well-known love of music, as discussed during the February 22 panel, the two concerts were an especially fitting commemoration. On February 21, the Bilkent Music Days series offered a “Tribute to Hocabey,” with Mozart’s Violin Concerto No. 5 (“Turkish”) and Tchaikovsky’s “Nutcracker” Suite played by the Bilkent Symphony Youth Orchestra under the baton of conductors Işın Metin and Barış Demirezer, with violin soloist Nilüfer Sude Güçlü.

On the evening of February 25, the Bilkent Symphony Orchestra gave a second concert dedicated to the memory of Prof. Doğramacı. The orchestra, conducted by Gürer Aykal, performed pieces by Mozart, Bach and Shostakovich, with soloists Philippe Grauvogel (oboe) and Irina Nikotina (violin).