Mass production of advanced optical fibers in Turkey is now for the first time a reality – an important development that has been achieved as the result of a 10-year study at the Bilkent University National Nanotechnology Research Center (UNAM). 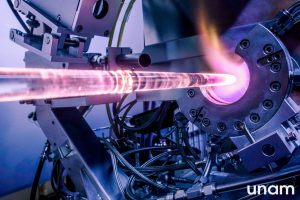 The active type of optical fiber produced by UNAM was registered as Turkey’s first such domestically produced fiber by an academic and technical delegation consisting of experts and representatives from TÜBİTAK, the Defense Industry Presidency, the Land Forces Command and selected universities. These optical fibers are referred to as “active” because they amplify light.

UNAM also has the ability to produce polarization-maintaining (PM) optical fibers, for which Turkey is at present completely dependent upon external suppliers. PM fibers are used as a critical component in the navigation systems and gyroscopes of guiding systems, thanks to their ability to maintain the electric field of guided light in a fixed direction.

UNAM houses the only infrastructure in Turkey with the mass-production capability to meet Turkey’s optical-fiber demands; the facility can easily produce hundreds of kilometers of fiber in a few days. These UNAM optical fibers can be delivered to end users as mass-produced, labeled products, which can be employed in laser-cutting applications in the manufacturing industry as well as in defense applications.

UNAM serves more than 1,500 users at 107 universities and 100 companies. The center is supported by government funding as stipulated in Law No. 6550 on the Support of Research Infrastructures.