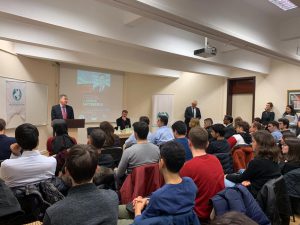 On December 17, US Ambassador to Turkey David Satterfield visited Bilkent. During this, his first visit to a Turkish university, he met with Chairman of the Board of Trustees Ali Doğramacı and Rector Abdullah Atalar for a conversation that included discussion of higher education issues as well as the university’s priorities. Ambassador Satterfield later met with members of Bilkent’s Political Thought Society, providing him an opportunity to engage with a large group of students on a range of foreign policy topics.