Who Are Tool, and Why Is Their Last Album a Huge Disappointment?

30 September 2019 Comments Off on Who Are Tool, and Why Is Their Last Album a Huge Disappointment?

I’ve had my fair share of listening to the band Tool, who recently released a new album and stirred up the metal and rock communities. I’m sure most readers of this column are familiar with Tool, but before going on to analyze this latest development, I’ll do my best to explain who they were, what their motivations were and who they are now.
Let me take you to the early 1990s. The brave new musical world of the ’80s had brought before our eyes some of the greatest musical ventures to ever take place, such as the invention of post-punk and New Wave, and electronic music becoming mainstream with synth pop. The advent of synthesizers was one of the most thrilling aspects of this era, with even most metal bands embracing them. The end of this musically active decade gave birth to the noisy, angry, chaotic, depressive and pessimistic grunge scene, which is often associated with punk-influenced bands like Nirvana.

Since Tool was formed in this era, they’re continually discussed in association with the grunge scene, although I would disagree with this. They’re musically distant from the punk scene, with influences from progressive music giants such as King Crimson, or Emerson, Lake & Palmer, as manifested in Danny Carey’s drumming style. They’re much different from your usual ’90s metal or grunge band, with their heavy use of polyrhythms and evident avoidance of the lengthy, shreddy guitar solos that have nowadays become an overdone motif in music. The themes of their songs are mainly family problems, rejection of religious ideas, critiques of society, dissolution of ego and defense of psychedelic substances. These themes are characteristically touched upon with a sense of humor in Maynard James Keenan’s often cryptic and allegorical lyrics. 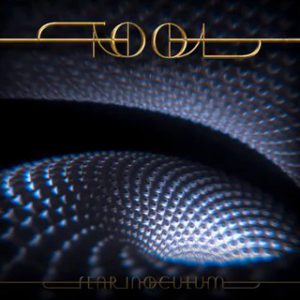 I’ll now go on to review Tool’s releases to this point and explain my frustration with their newest album.
Their musical career started with an EP titled “Opiate.” This album (whose title refers to a quote from Karl Marx, “Religion … is the opium of the people”), deals with the themes of oppressive religion, censorship, and freedom of thought and speech. Musically, the album is a beautiful combination of punk rock and heavy metal. The star is Maynard James Keenan, with his punk attitude and powerful, screaming vocals. Adam Jones has not yet found his signature guitar style here, and while Danny Carey’s drumming is flawless, he too has not yet arrived at his own style. The instrumentalist who really shines here is Paul D’Amour, with his intricate bass lines. This album highlights the tight rhythm section that will dominate Tool’s sound.

The band’s first LP was “Undertow,” which I enjoy but find rather weak compared to their later releases. This album carries a heavy metal sound, with D’Amour’s Chris Squire Signature Rickenbacker 4001 as the cherry on top. All songs are deliberately produced, with themes that are often personal and cryptic. After this album, D’Amour leaves the band, giving up his place to Justin Chancellor, who makes Tool the band we know and love today.

“Ænima” was their third album, and fans often rank it as their personal favorite. It features Tool classics such as “Stinkfist,” “Forty Six & Two,” “Pushit” and “Eulogy,” along with one that has a name I can’t write here because I may lose my column, and another one that I consider their best, “Third Eye.” This album has a unique sound that’s still not comparable to anything that exists today. Tool here focuses on Keenan’s personal issues along with criticism of moral issues in society. They found their identity as “Tool” here, as a distinguished band that will be remembered as a pioneer of a unique sound, and not just another grungy ’90s band.

After “Ænima” came “Lateralus.” The album’s mathematical structure is still a topic of discussion among Tool fans. The themes of the songs are difficult to understand after one’s first introduction to them, and many are incomprehensible even after many listening sessions. There’s nothing much to say about this album – one should play it and experience it oneself. The most significant tracks are “Lateralus,” “Schism,” “Ticks and Leeches,” “The Patient,” “Reflection” and “Parabol & Parabola.”
Their last album was, until recently, “10,000 Days.” It was a memorial to Keenan’s late mother, Marie Keenan, who had been in a coma for 27 years – roughly 10,000 days. The album is hypnotic, as many musical patterns are repetitive, but not to the extent that it becomes boring. Guitar riffs are staccato-heavy, bass tones are bright but at the same time have a deep low end. The combination of these guitar–bass elements with Carey’s virtuoso drum playing and Keenan’s vocals makes the album musically irreplaceable.

However, their recently released album, “Fear Inoculum,” was a great disillusionment. It’s as if, after 13 years, the band has become their own fans and tried to imitate their own sound. Most songs are underproduced, the fillers make you lose your concentration, and the song structures are underwhelming. It feels like they improvised over a few riffs for seven tracks. Jones put no new ideas into his licks at all, except for a few sections where he pretends he is soloing. Chancellor has the same great bass tone we know and love, which reminds us that this is still a Tool album, but he’s way too underutilized. Carey is still the strong foundation of the band here, but even he sounds like he’s bored and wants to leave as soon as possible. I have nothing to say about Maynard James Keenan, as he sounds like he just wants to go home and work on his wines. The members still form a tight band, though. The music is still original and has its own soul, compared to contemporary metal trends such as djent. The problem with this album is that it’s filled with Tool clichés and has nothing new to put on the table. The take-away message is: The album is musically impressive and would be very good as a 2000s metal band’s debut, but has no appealing atmosphere and just doesn’t quite feel like the Tool we know and love.