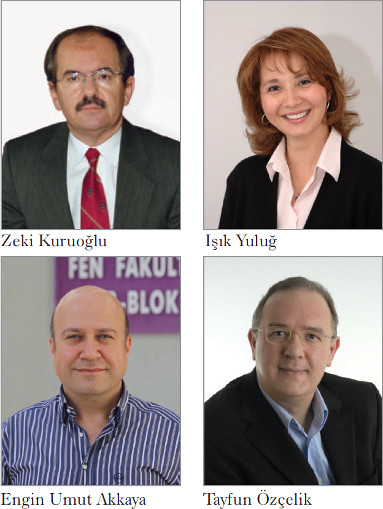 Prof. Kuruoğlu, a graduate of METU (BS in chemical engineering), Yale University (MS in theoretical chemistry) and the University of Florida (PhD in theoretical chemistry/chemical physics), joined Bilkent University as an associate professor of chemistry in 1989. He was promoted to a full professorship in 1992, and served as the university’s associate provost from 1992 to 2010. He was also acting dean of the Faculty of Education from 2000 to 2010.

His research interests are in the areas of scattering theory of many-body systems, quantum theory of chemical reactions and computational methods for quantum mechanical problems.

Dr. Yuluğ, a graduate of the Hacettepe University Department of Biology, received a master’s degree from the Department of Medical Biology in Hacettepe’s Faculty of Medicine and a PhD in molecular genetics at the Imperial College of Science, Technology and Medicine of the University of London. She joined Bilkent University in 1996, and served as assistant chair of the Department of Molecular Biology and Genetics from 2001 to 2007 and as deputy chair in 2007-2008.

Her research group has concentrated on working on the identification and expression profiling of the genes involved in the initiation and progression of human malignancies, in particular breast cancer.

Dr. Yuluğ was awarded a NATO PhD fellowship by TÜBİTAK, and is a recipient of the Lawley Scholarship at the University of London, the Best Scientific Work Award of the World Society for Breast Health and the L’Oreal-UNESCO Women in Science Award.