“Sports as a Way of Life” Basketball, Football and Volleyball Tournaments

admin September 15, 2015 Comments Off on “Sports as a Way of Life” Basketball, Football and Volleyball Tournaments

If you’d like to compete in the basketball, football or volleyball tournaments soon to begin as part of the “Sports as a Way of Life” program, now is the time to get your friends

SUDOKU Here are two Sudoku puzzles. Submit the contents of the diagonal going from the top left to bottom right of each puzzle to win a prize. Good luck! Last week’s answers:Sudoku 1: 326 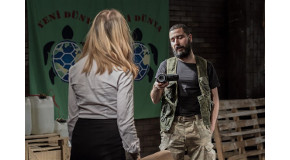 American playwright William Mastrosimone’s “Cat’s Paw” will be performed by Department of Performing Arts students on September 17 and October 8, 15 at 8 p.m. in the Bilkent Chamber Theater. The one-act play will