A 20th Season of Music at Bilkent Begins 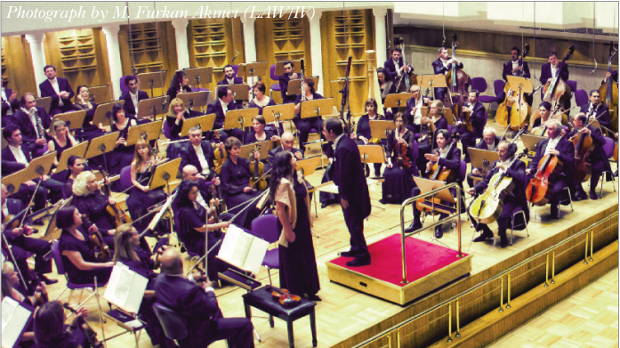 The Bilkent Symphony Orchestra opened its 20th season on Friday, October 4. The BSO was founded in 1993 and celebrated its second decade, along with Verdi’s 200th birthday, with a gala concert two weeks ago. Last weekend’s opening concerts, on Friday and Saturday, consisted of pieces by Smetana, Mahler and Dvorak, and were conducted by BSO Artistic Director Işın Metin.

The concert started with what is perhaps the most famous work by Czech composer Bedrich Smetana, the symphonic poem “The Moldau.” A musical description of the movement of the Moldau (Vltava in Czech) River, it is one of a collection of six symphonic poems based on the Czech landscape and culture.

The remainder of the first half of the concert featured two pieces each by Gustav Mahler and Antonin Dvorak: “Rheinlegendchen” (Rhein Legend) and “Rückert Lieder No. 3” by Mahler; and by Dvorak, “Songs My Mother Taught Me” and the famous “Moon Song” from his opera “Rusalka.” Soloist in all four pieces (as well as the last movement of the symphony) was world-renowned Swedish soprano Klara Ek.

Mahler, one of the musicians who facilitated the transition from 19th-century romanticism to 20th-century modernism, is best known for his symphonies, and the second half of the concert consisted of his Symphony No. 4. Unlike Mahler’s other symphonies, this composition is quite pure and delicate, and can even be called a “return to Haydn.”