A Blind Date on Valentine’s Day 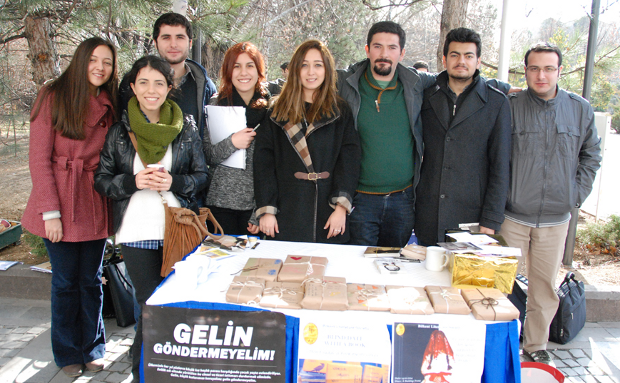 Did you ever consider taking a book on a blind date for Valentine’s Day? Well, the members of the Literature Society (Edebiyat Topluluğu) helped Bilkenters find true love, with another awesome project on February 14 in front of the A Building. They spiced up their fellow students’ reading lives by setting them up with blind dates in book form.

Most of us have been seduced by a beautiful cover, and then been upset when the story fell flat. So the Literature Society, after picking out 109 books to be put up for sale, wrapped them in brown paper to conceal their titles, covers and other identifying information. On the front, a brief description of genre of the book was given; some covers had drawings that offered possible clues about the contents.

In this way, the Literature Society was saying, “Don’t judge a book by its cover.” There was also an underlying message that spoke to a serious social issue: “Don’t buy a child bride; buy books instead.” In this context, the proceeds from the sale—with all 109 books, plus 50 mugs being sold—were donated to the Child Bride Project of the ICC (the International Children’s Center).

The ICC was established jointly by the government of France and UNICEF in 1949 in Paris in order to train and support pediatricians from developing countries and to facilitate discussions on priority issues in child health. Fifty years later it was closed due to financial difficulties. But with the support of the Turkish government, several UN agencies and Prof. İhsan Doğramacı, the Center reopened in 1999 on the premises of Bilkent University, where its headquarters remain today.