A First for the BSO: New Year’s Concert Broadcast Live Online by COMD

29 January 2018 Comments Off on A First for the BSO: New Year’s Concert Broadcast Live Online by COMD 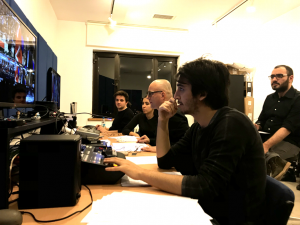 The Bilkent Symphony Orchestra ended 2017 with a special event: on December 29, the orchestra’s New Year’s concert was broadcast live on the internet by a team from the Department of Communication and Design, with technical assistance from the Bilkent Computer Center.

The concert, conducted by George Petrou and featuring bass Wolfgang Bankl as vocal soloist, was scheduled for two performances, on December 28 and 29. Both were sold out in advance, leaving many would-be concertgoers unable to obtain tickets.

So, said BSO Music Director Nusret İspir, “We decided to broadcast the concert live on our YourTube channel in collaboration with the Department of Communication and Design. And we’re very pleased with the great success of this live event.” During and after the performance, more than 3,000 viewers from all over the world tuned in to the concert and 900 new subscribers were registered on the BSO YouTube channel.

The broadcast was executed by undergraduate, master’s and former COMD students under the supervision of department faculty members Lutz Peschke, Yusuf Akçura and Andreas Treske, with Can Uğur Ayfer of the Bilkent Computer Center responsible for implementing the livestream of the concert.

In two different courses offered during the past two years, COMD students have received instruction in multicamera production and live recording of concerts in collaboration with the BSO. This training and experience, noted Mr. Peschke, made possible the high quality of this first live BSO broadcast.