A New Phase for the Center for Russian Studies 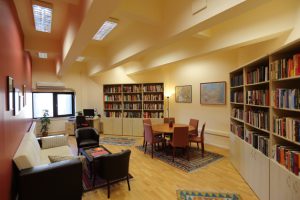 After a decade of relative inactivity, the Bilkent Center for Russian Studies (CRS) is experiencing a renaissance this spring. Initially founded in the late 1990s, CRS aims to reestablish itself as one of the region’s leading academic centers for the study of Russia, Eastern Europe and Eurasia. Affiliated primarily with the Department of International Relations but with connections to other Bilkent departments as well, CRS brings together a cohort of scholars with diverse thematic interests.

One of the first steps for CRS has been to establish a visible presence on campus. Through faculty contributions, CRS has created a strong collection of Russia- and Eurasia-related books in a dedicated room in the FEASS building (A-329a). The CRS website and Twitter account have been revitalized to reflect current activities, and CRS looks forward to welcoming Bilkent students and faculty to its events.

CRS is active outside of Bilkent as well. Turkey and Russia have designated 2019 as a year of bilateral cultural exchange, and CRS and Tarih Vakfı in İstanbul have partnered to offer a series of lectures on the intersection of Turkish and Soviet history during the founding years of the Turkish Republic. On March 14, the director of CRS, Asst. Prof. Onur İşçi, delivered the first talk in İstanbul, on economic and strategic aspects of Soviet–Turkish friendship in the 1930s. Asst. Prof. Samuel J. Hirst, associate director of CRS, delivered the second talk in the series on March 28, analyzing cultural relations in the same period. Both CRS contributions to this lecture series had a strong Turkey-related component, and this reflects a commitment to offer a perspective on Russia and Eurasia that builds on CRS’s location here at Bilkent.

In addition to participating in and hosting academic events, CRS looks to have a cultural component. In December, film director Yasin Ali Türkeri came for a screening of his award-winning documentary, “Başka Tren Gıdı Gıdı.” The film tells the story of a textile factory in Nazilli that was built with Soviet financial and technical assistance in the 1930s. On March 11, Kurtuluş Özgen came to show an early cut of a documentary film – “Bozkırda Bir Modern” – about another Soviet-built factory, this one in Kayseri.

On May 13–14, CRS plans to welcome a number of guests to Bilkent for a conference on the topic of Russia and Turkey since World

War I. Colleagues from Tarih Vakfı will come for a two-day event that will be a continuation of the İstanbul lecture series.